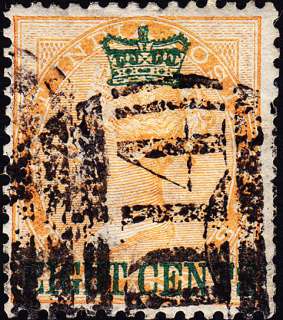 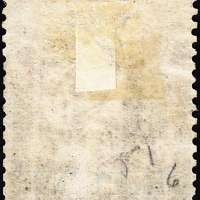 Surcharged by De La Rue in different coloured inks to distinguish the various values because the 1 anna brown and 2 annas yellow were used to make three different “cents” values each.

The Straits Settlements, a British colony of islands off the Malayan peninsula that included Singapore, used stamps from India between 1854 and 1867. When the Settlements became a crown colony in 1867, they began issuing their own stamps, not least because they adopted a currency based on 96 cents to a silver dollar.

Straits Settlements first adhesive stamps were issued beginning on 1 September 1867, nine types in the existing stocks of Indian stamps featuring a portrait of the young Queen Victoria, and the stamps were inscribed with a crown across the top and the "cents" denomination across the bottom.

A surcharge is an inscription on a stamp that alters its value, either an increase or decrease. Most stamps are printed with one surcharge, but the Straits Settlements stamps carried two - one for altering value and second to alter the currency.