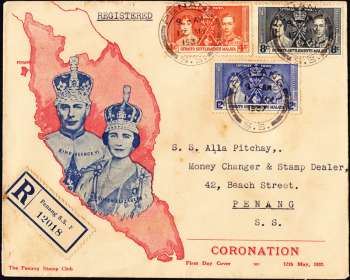 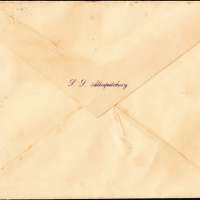 Despite the low grading of average-to-almost-poor condition as plenty of tonings can be seen on the cover, this is rather an interesting cover as there was no known initiative to issue first day cover for any of previous releases of stamps in Straits Settlement.

George VI (Albert Frederick Arthur George; 14 December 1895 – 6 February 1952) was King of the United Kingdom and the Dominions of the British Commonwealth from 11 December 1936 until his death. He was the last Emperor of India and the first Head of the Commonwealth.

The coronation of George VI and his wife Elizabeth as king and queen of the British Empire and Commonwealth took place at Westminster Abbey, London, on 12 May 1937. George ascended the throne upon the abdicationof his brother, King Edward VIII, on 11 December 1936, three days before his 41st birthday. Edward's coronation had been planned for 12 May 1937 and it was decided to continue with his brother and sister-in-law's coronation on the same date.