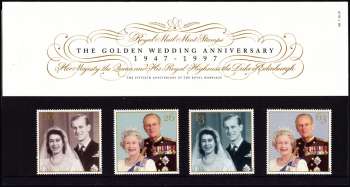 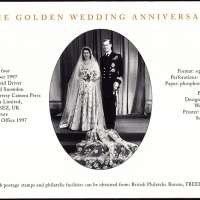 GENERAL INFORMATION
Country
United Kingdom
Type
Presentation Pack
Class
Commemorative
Issued Date
13/11/1997
Printer
Harrison & Sons Limited
Printing Method
Photogravure
Gum
Gum
Perforation Gauge
15 x 15
IN COLLECTION CONDITION
Preliminary
Normal
Condition
Mint Never Hinged - Extra Fine
Great Britain - Queen Elizabeth II & Prince Philip - Royal Golden Wedding (1997) Presentation Pack
Elizabeth and Philip are second cousins once removed (by descent from Christian IX of Denmark and Louise of Hesse-Kassel) and third cousins (by descent from Victoria of the United Kingdom and Albert of Saxe-Coburg and Gotha). Elizabeth met Prince Philip of Greece and Denmark in 1934, at the wedding of Philip's cousin, Princess Marina of Greece and Denmark with Prince George, Duke of Kent and uncle of Elizabeth, and again in 1937. After another meeting at the Royal Naval College in Dartmouth in July 1939, Elizabeth—though only 13 years old - fell in love with Philip and they began to exchange letters. An entry in Chips Channon's diary made reference to the future marriage of Elizabeth and Philip as early as 1941, "He is to be our Prince Consort, and that is why he is serving in our Navy." The couple became secretly engaged in 1946, when Philip asked King George VI for his daughter's hand in marriage. The King granted his request providing any formal engagement was delayed until Elizabeth's twenty-first birthday the following April. Their engagement was officially announced on 9 July 1947.

The wedding of Elizabeth II and Prince Philip, Duke of Edinburgh took place on 20 November 1947 at Westminster Abbey in London.

The wedding ceremony was officiated by the Archbishop of Canterbury, Geoffrey Fisher and the Archbishop of York,Cyril Garbett. The ceremony was recorded and broadcast by BBC radio to 200 million people around the world. Elizabeth and Philip then proceeded to Buckingham Palace, where a breakfast was held at the Ball Supper-room. The couple received over 2,500 wedding presents from around the world and around 10,000 telegrams of congratulations.

Upon their marriage, Elizabeth took the title of her husband and became Princess Elizabeth, Duchess of Edinburgh. They departed for their honeymoon in Broadlands in Hampshire, home of Philip's uncle, Earl Mountbatten.