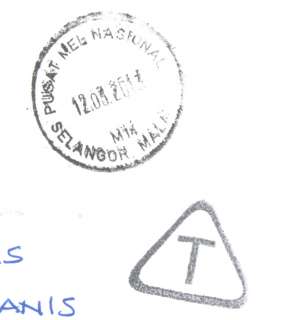 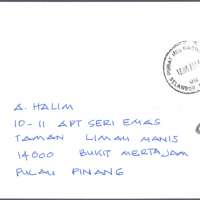 This postal cover has been delivered WITHOUT post office claiming for the shortage amount. It has been posted WITHOUT any stamp. The insufficient stamp amount for the normal postal is RM0.60 (within Malaysia).

Two postmarks were made, one describing the mail processing centre and the other, T in triangular is for TAX or DENDA (in Malay).

The postmark in circle reads:

The postal was dropped into mailbox by the entrance into Low Cost Carrier Terminal (LCCT) in KLIA on 8 March 2013 and only delivered on 15 March 2013.