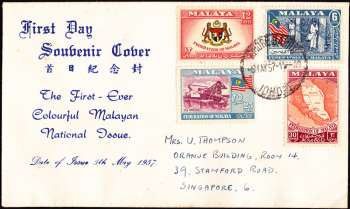 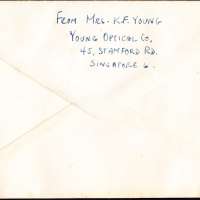 The Federation of Malaya (Malay: Persekutuan Tanah Melayu; Jawi: ڤرسكوتوان تانه ملايو) is a federation of 11 states (nine Malay states and two of the British Straits Settlements, Penang and Malacca) that existed from 31 January 1948 until 16 September 1963. The Federation became independent on 31 August 1957, and in 1963 was reconstituted as Malaysia with the addition ofSingapore, North Borneo, and Sarawak. The combination of states that formerly made up the Federation of Malaya is currently known as Peninsular Malaysia.

Despite the Federation was formed in 1948, stamps were however still state-issued and only in 1957 (9 years later) that the first set of stamps meant to be used country-wide without any particular state name, but rather inscribed with FEDERATION OF MALAYA.

It was issued ahead before Independence commemorative stamp and these stamps were used in large number.

This private cover is in sound condition, but with brown spots of toning. However, it still look interesting and is of course a good FDC to keep.

It is interesting to note that despite the sender's address in Singapore, it was processed in Johore Bahru and during this time, Singapore was excluded from the Federation.