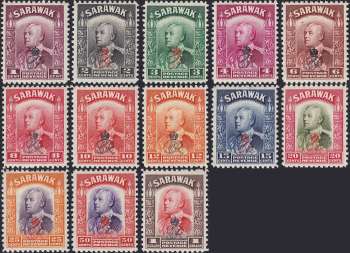 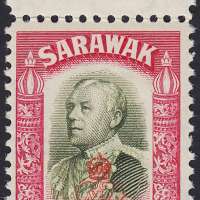 20¢ is with margin and the hinges was placed on the margin area, therefore this particular stamp is considered MNH.

The Kingdom of Sarawak was a state in Borneo established by SirJames Brooke in 1841 by receiving independent kingdom status from theSultanate of Brunei as a reward for helping fight piracy and insurgency. In 1888 Charles Anthoni Johnson Brooke, the successor of James Brooke, accepted a British Protectorate, which it remained until 1946, when the third ruler Charles Vyner Brooke ceded his rights to the United Kingdom.

After the end of the World War II, the territory was administered by the British Military Administration and later transferred to the Crown Colony government in 1946.

After the World War II, Vyner Brooke ceded Sarawak to the Colonial Officefor a sizeable pension for him and his three daughters. Charles' nephew,Anthony Brooke, who as designated heir bore the title of Rajah Muda, initially opposed cession to the Crown along with a majority of the native members of the Council Negri, or parliament.