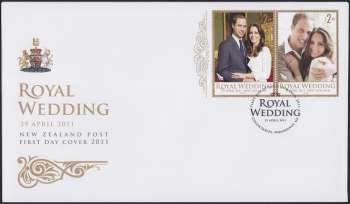 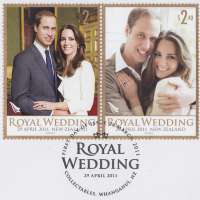 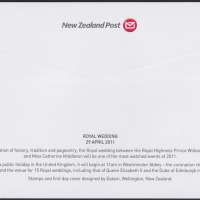 The greatly admired couple are captured beautifully on the se-tenant set of two over-sized stamps (measuring 52mm x 37.5mm). Featuring a stunning metallic gold border, they portray William and Catherine in both a formal pose and an informal embrace. The denomination of both stamps is $2.40, which is the postage rate of a standard letter to the United Kingdom.

The wedding of the year

The Royal wedding will take place at the 1000-year-old Westminster Abbey – the coronation church since 1066 and the venue for 15 Royal weddings, including that of Queen Elizabeth II and the Duke of Edinburgh. Once married, the couple will return to Buckingham Palace where The Queen will host a reception, followed by a private dinner hosted by The Prince of Wales.

As part of the Commonwealth of Nations – and as a country founded on the immigration of British settlers – New Zealand has a proud relationship with the United Kingdom and its Royal family. We first met Prince William when he was just nine months old, accompanying his parents on their official tour of Australia and New Zealand. Now a potential future King, New Zealanders worldwide will tune in to see him and his bride walk down the aisle.

The Royal Wedding stamp issue from New Zealand Post on sale to celebrate the impending wedding of Prince William and Catherine Middleton has approval from the very top.

Permission for the set featuring shots of the couple in formal and informal settings had to be gained from Her Majesty Queen Elizabeth II and Prince William.

New Zealand Post Stamps and Collectables general manager Ivor Masters says in addition to gaining permission there has been feedback from the Queen regarding the design and content of the presentation pack.

“Her Majesty conveyed that she likes the designs very much, which is gratifying,” Masters said.

“We’re confident a wide range of New Zealanders – not just collectors – will appreciate the stamps as well. There is always tremendous interest in royal themed issues and we expect there to be a heavy demand here and overseas,” he said.

The previous New Zealand Post stamp issue for a royal wedding was in 1981 for the marriage between Prince Charles and the then Lady Diana Spencer [Opens in a new window.] .

“That was an extremely popular issue, and it is remarkable 30 years later the appetite and interest in royal weddings is undiminished,” Masters said.

The set of two over-sized stamps in this issue feature a metallic gold border and portray Prince William and Catherine Middleton in both a formal pose, and an informal embrace.

The denomination of both stamps is $2.40, which is also the postage rate to send a standard letter to the United Kingdom from New Zealand.

The Royal Wedding stamps are available for purchase from 23rd March 2011 at all New Zealand PostShop stores, REAL Aotearoa stores in Wellington and Auckland, the Whanganui Collectibles and Solutions Centre.