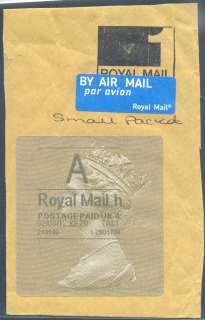 Since the introduction of automated tills at Post Office branches, white rectangular postage labels have replaced stamps on many letters, packets and parcels. Such labels are generally referred to as “Horizon” labels, after the name of the PO computer system concerned. Initially, all first-class items bore labels showing “1st”, and second class showing “”2nd”, with bilingual versions in Wales.