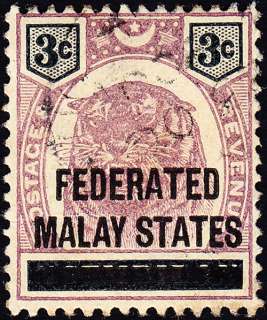 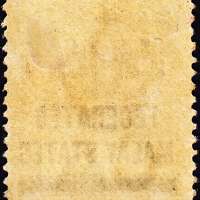 After Federation was formed in 1895 and when the Resident-General decided that single stamp should be used in the Federation, he did not make his mind decisively which led to stamp shortages as each individual states no longer made any new order with Crown Agent and De La Rue. Therefore, some states which higher volume of mails had to resort to surcharge higher value stamps with necessary value, 1 and 3 cents, for postcards and letters respectively.

Lower volume mails like Negeri Sembilan do not need to do overprint on its own stamp as it has enough in stock, however to conform to the new needs of the Federation's singular name on the stamp, therefore resorted to cancel the state's name with a bar and overprinted FEDERATED MALAY STATES.

In Negeri Sembilan, the overprinted started to avail to public in April 1900.

USED, but the postmark is too faint to read.
ORIGINAL GUM, somehow the 'first owner' managed to remove it very nicely and keeping the gum intact.
HINGED.