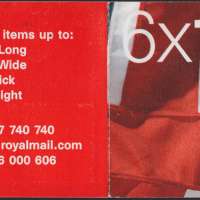 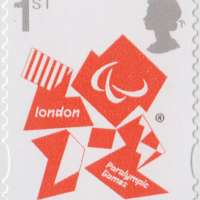 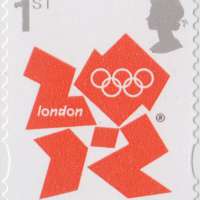 The four elements of the Olympic Emblem (outlines of the numerals of 2012) are designed to accommodate different colours and imagery.  The 2012 Paralympic Games Emblem is composed of the same elements as the one for the Olympiad, but features three ‘agitos’ (asymmetrical crescent shapes denoting movement) instead of the Olympic Rings and the words ‘Paralympic Games’ at the bottom right.

The Queen’s image also features on the stamps, in the corner.

6 x 1st class stamp booklets was issued in two different types. One shows the Key Dates for London 2012, the other includes a quote from Seb Coe who leads the London Organising Committee. The stamp arrangement in the two books is different.

This particular booklet is the one with Seb Coe's quote:

"London's vision is to reach young people all around the world, to connect them with the inspirational power of the Games, so that they are inspired to choose sport."

In August 2009, the Royal Mail commissioned artists and illustrators to design 30 stamps, which were released in batches of 10 between 2009 and 2011. The last ones were released on 22 July 2011. Two £5 coins designed by Saiman Miah have been made to commemorate the 2012 Olympics. As with other Olympics since 1952, the Royal Mint will strike a set of commemorative one-kilogram gold and silver coins.

THANK YOU SO VERY MUCH JIM, THIS PARTICULAR ONE IS NOW ADDED TO MY OLYMPIC 2012 COLLECTION.