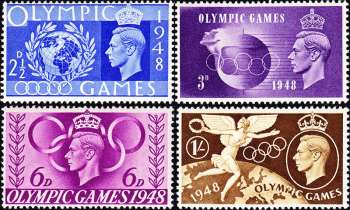 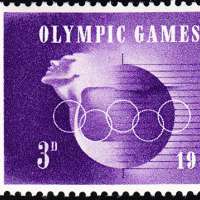 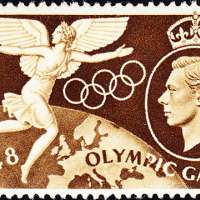 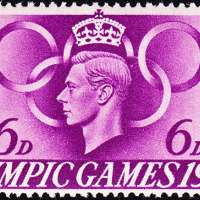 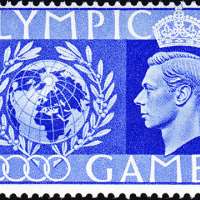 The blue stamp above (2½d), representing the “Globe and Laurel Wreath,” was designed by sculptor Percy Metcalfe. This stamp, first in the set, had the largest circulation size.

The 1948 Summer Olympics, officially known as the Games of the XIV Olympiad, were an international multi-sport event which was held in London, England, United Kingdom. After a 12-year hiatus because ofWorld War II, these were the first Summer Olympics since the 1936 Games in Berlin. The 1940 Games had been scheduled for Tokyo, and then for Helsinki; the 1944 Games had been provisionally planned for London. This was the second occasion that London had hosted the Olympic Games, having previously been the venue in 1908.

In June 1939, the International Olympic Committee (IOC) awarded the 1944 Olympic Summer Games to London, ahead of Rome, Detroit, Budapest, Lausanne, Helsinki, Montreal and Athens. World War II stopped the plans and the Games were cancelled so London again stood as a candidate for 1948. Britain almost handed the 1948 games to the USA due to post-war financial and rationing problems, but George VI said that this could be the chance to restore Britain from World War II. The official report of the London Olympics shows that there was no case of London being pressed to run the Games against its will. It says:

The Games of 1944 had been allocated to London and so it was that in October 1945, the chairman of the British Olympic Council, Lord Burghley, went to Stockholm and saw the president of the International Olympic Committee to discuss the question of London being chosen for this great event. As a result, an investigating committee was set up by the British Olympic Council to work out in some detail the possibility of holding the Games. After several meetings they recommended to the council that the Lord Mayor of London should be invited to apply for the allocation of the Games in 1948.
In March 1946 the IOC, through a postal vote, gave the summer Games to London and the winter competition to St Moritz. London was selected ahead of Baltimore, Minneapolis, Lausanne, Los Angeles, and Philadelphia.

When London was given the honor to host the Olympics again in 1948, Games of the XIV Olympiad, Great Britain took on the challenge to design symbolic stamps to mark the occasion.
“The Post Office could hardly refuse to issue stamps for the 1948 Olympic Games, as the precedent had been established by host nations in previous years. At first, just two stamps were envisaged, 2½d and 3d, later extended to include the 6d and 1/-. An air letter using the design of the 6d stamp was also planned.
Consulting with the Council of Industrial Design, several artists, and the four main stamp printers, were approached. From the designs submitted the Council chose work by G. Knipe of Harrison & Sons, S. D. Scott of Waterlows, Edmund Dulac, Percy Metcalfe and Abram Games. Before these were shown to the King, the Postmaster General felt another option should be offered, and recommended a design by John Armstrong...”
—The British Postal Museum & Archive
COMMENTS
NEW COMMENT