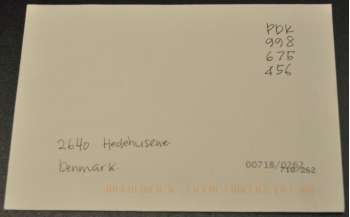 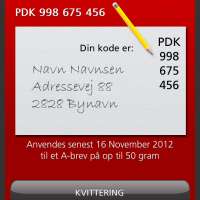 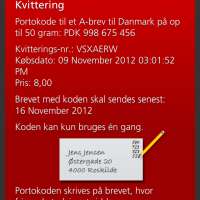 Postal services in Denmark are under responsibility of Post Danmark A/S and handled roughly a billion letters each year. On 1 April 2011, a new service called Mobilporto was introduced that allows customer to buy stamp through mobile phone. Interestingly, it works on any phone but one with smartphone can take advantage by downloading an application to help the purchasing process. (iPhone, Android & Windows Phone)

Mobilporto, a Mobile Postage is unlike the traditional postal stamp is a four lines of code with three characters on each line that is sent through SMS and to be written by the sender. This service is only intended for mailing within Denmark.

I consider this as a philatelic cover. The Mobile Postage was bought using an iPhone application and payment through credit card NOT issued in Denmark, therefore any visitor can do this. The process for payment confirmation was really quick.

I bought A Prioritaire for up to 50 gram which cost DKK 8.00

No normal franking or postmark visible except for sorting and routing code (?) as well as orange magnetic ink.

1. (?) Means that I am not really sure whether the code was meant for sorting and routing.
2. A phone needed to be "activated", whereby Post Danmark will sent a four-letter code.
3. The application for iPhone/iPad was meant only for users in Denmark, in order to download, change the location in the iTunes to Denmark.