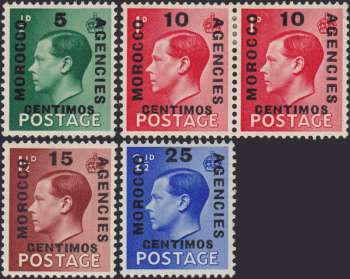 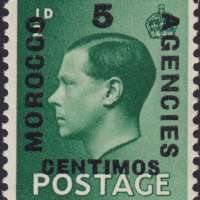 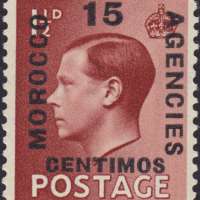 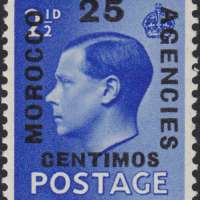 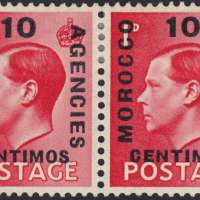 The British post offices in Morocco, also known as the "Morocco Agencies", were a system of post offices operated by Gibraltar and later the United Kingdom in Morocco.

Spanish-currency stamps were also available at all offices until the establishment of theFrench Zone, after which they were limited to the Spanish Zone. The overprint was basically the same as for the British-currency stamps, with the added complication of needing to fit in the denomination in Centimos and Pesetas. All types of British stamps were overprinted, the last being the issues of Elizabeth II in the summer of 1956; all were withdrawn from sale 31 December of that year.

Following the death of George V on 20 January 1936, questions quickly arose as to postage stamps bearing the head of Edward VIII. It was decided within the Post Office that there would be three possible issues.

The first, with values to 1s, would be a temporary "Accession" issue to be produced as soon as possible. This would be replaced by a special "Coronation" issue. On the withdrawal of these commemoratives the first denominations of a "Permanent" series would be released.

It was agreed very early on that there would be no invitation to artists to submit designs. In January and February, A.S. Willmot, Chief of the Engineering Department GPO Drawing Office, was asked to produce a number of designs. These rough drawings were sent to Harrisons the printers, who produced stamp-sized bromides of them.

Work concentrated on a portrait of Edward in the uniform of Colonel-in-Chief of the Seaforth Highlanders. However, these essays were rejected.

With the adoption of photogravure it was possible to produce a portrait more successfully; with this process specifically in mind, the first essential was an acceptable photographic portrait of the King. Profile pictures by Hugh Cecil were specifically taken for the stamp issue in March.

H.J. Brown, then only 17, submitted an unsolicited pencil drawing in April 1936. The only graphic decorations on the stamp were the crown, the denomination in the upper corners, and the word "POSTAGE" at the bottom. Brown's project, the simplest of all submissions, placed the words "POSTAGE" and "REVENUE" on the lateral sides. The Post Office wrote to Mr Brown telling him that his proposed design could not be used. After the stamp came out, clearly using Brown's design, Brown's father issued a statement regretting the Post Office's deceit.

Harrisons prepared four different essays based on the Brown design with the Cecil head. Three versions were submitted to the King on 26 June and he approved that one favoured by the Post Office – type 3 but with the improved crown.

Watermarked with a crown and "E8R", the stamps were issued on 1 September 1936 for the halfpenny green, the threehalfpence brown and the twopence halfpenny blue, and on 14 September for the one penny red.

The four or part of the four stamps were overprinted to be used in the British post offices in Morocco. For Tangier, the name of the town was onverprinted alone. "MORROCO AGENCIES" was overprinted with a new face value in French centimes or Spanish céntimos depending the zone of the post office.

1. For use In the International Zone, Overprinted TANGIER and using British currency - 2 pieces.