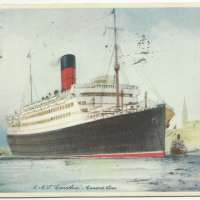 The quality of the card is fine as the corners look worn, obverse top-left and obverse top-right.

Franking mark impression from another card can be seen on obverse, probably was not dry enough when put together.

POST CARD
CORRESPONDENCE
FOR THE ADDRESS ONLY
PRINTED IN ENGLAND

Dear Eric,
This is the ship
I am sailing on,
& on Christmas
day I expect to
be in the plane
on my way to
California

RMS Carinthia was first laid down in Barrow-in-Furness in 1924 with the yard number Hull 586. Originally she had the name Servia but was renamed at the time of her launching on 24 February 1925. She made her maiden voyage on 22 August, 1925 from Liverpool to New York. At her launch she was the largest of the five post First World War intermediate size liners. The Carinthia plied the Atlantic on the Liverpool-Boston-New York route.

This "Carinthia" is the second ship of the name in the Cunard fleet.

At 13.13 hours on 6 June, 1940 the Carinthia, on a northern patrol, was torpedoed off the Irish Coast west of Galway Bay, in coordinates 53° 13’ N - 10° 40’ W by the German submarine U-46. The badly damaged ship remained afloat for 36 hours before she sank during the evening of 7 June. Two officers and two ratings lost their lives in the sinking.

Ship Mail known as Paquebot, French being the world's official postal language. The basics of Paquebot is ratified by international convention.

A postal marking or cancellation stamped on mail posted at sea or in a harbour for processing by the postal authorities at the next port of call. Mail so marked in one country will often carry the stamps of another country.

The use of an official mark to denote mail posted at sea was regulated by international agreements at various meetings of the Universal Postal Union (UPU). The first rules were drawn up at the 1891 meeting while the first mention of the word "Paquebot" came in the 1897 meeting. The clause, translated from the official French, reads:

"The Post Office which receives correspondence posted on board, provides same with its common datestamp, adding handwritten or by a stamp the word Paquebot."

Simply put, if someone is on the open sea, which belongs to nobody, the deck he is standing on is the territory of the country under which flag the ship sails. That means, that if he writes a letter on the ship's deck and on the high sea, he should be able to use the stamp of the country under which the ship sails. That also means, that if a ship enters a harbor, the officer should be able to hand over the mail to the local post office at that harbor in whatever country, and the mail should be delivered without any additional charge.