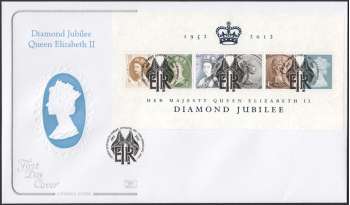 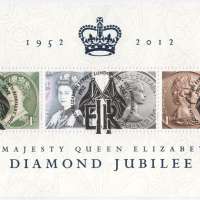 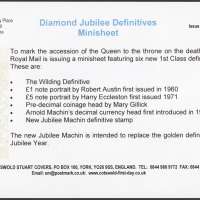 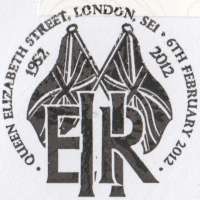 The Diamond Jubilee Miniature Sheet, issued on 6th February 2012, is the first time that official portraits of The Queen as she appears on stamps, coins and banknotes, have been brought together.

Included among the six stamps is a brand new 1st Class diamond blue definitive stamp, millions of which will replace the current standard gold definitive in Post Offices during 2012.

Austin designed the first Bank of England notes to bear the monarch’s head. The engraving was based on a pencil sketch taken from a photographic portrait. The first note, £1, appeared in 1960

A new series of notes, designed by Harry Eccleston, began to appear in 1971. His portrait of the Queen on the £5 note showed her wearing the robes of the Order of the Garter, as on the subsequent £1 in 1978.

Coins with Mary Gillick’s design were first issued in 1953. This image is still used on Maundy Money to this day.

First issued in 1968, Machin’s design was created in 1963 for the new decimal currency, and subsequently provided the basis for the stamp image. The Machin coin image is printed next to the Machin stamp image in the sheet.

The classic definitive portrait by Arnold Machin issued in a new colour specifically for the Diamond Jubilee Year. It features iridescent ink highlighting the words ‘Diamond Jubilee’. To celebrate the Jubilee year a self-adhesive version of this stamp is replacing the gold definitive in general circulation.