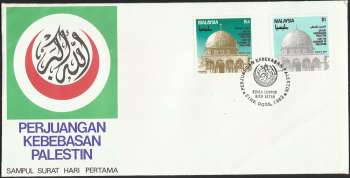 The name “Jerusalem” or Baitul Maqdis, as it is called in Arabic, is one of the most evocative words in many languages. This is so far no other reason than that this Holy City is among the most revered of the sacred sanctuaries for three great monoatheistic religions – Islam, Christianity and Judaism. Indeed Jerusalem had been a symbol of tolerance, peace and tranquility – an open city – until the Israeli aggression and occupation of Jerusalem (and other Arab and Palestinian territories) in 1948 and again in June, 1967.

Muslims regard Jerusalem as the third of the Holy Cities of Islam – after Mecca and Medina – wherein lies their third sacred Mosque, the Al-Aqsa. This Islamic Holy Shrine is the first Qiblat towards which Muslims, at the very dawn of Islam, turned for prayers. [Qiblat – or the direction of prayer – was later changed to Mecca.] Notwithstanding this change, Jerusalem retained its special status to Muslims. The Holy Places of Jerusalem and particularly the Rock of the Haram Al-Sharif is of special spiritual attachment to Muslims as it is where Prophet Muhammad (May God’s prayers and peace be upon Him) ascended to heaven. Hence, while Mecca represents to Muslims the point of convergence of the Islamic faith, Jerusalem is to Muslims a focal point for those who believe in God’s Oneness.

Furthermore, the adoration of Jerusalem in Islam is based not only on several verses of the Holy Quran, but also on the Muslims’ interaction with the Holy City since time immemorial.

A Canaanite tribe, the Jebusites, were the first to establish and inhabit Jerusalem. (The Jebusites were the descendents of the Samites, the early settlers of the Arabian Peninsular). The city assumed different names: the Jebusites first called it Jebus and then Ursalem (which means the city of peace); the Hebrews Urushalm; the Romans, Aelia Capitolina; and the Muslims, Baitul Maqdis. Also, it was not the Jews but various Arab tribes, viz. the Jebusits, the Canaanites, the Jibaites and the Philistines, who were the original settlers of Palestine.

In face, a procession of conquerors came to rule Jerusalem, including the ancient Egyptian Pharoes, the Hebrews, the Babylonians, the Persians, the Greeks, the Romans until the Islamic conquest in 637 AD when the Caliph Omar Ibn Al-Khattab entered Jerusalem in 638 AD (and ordered a grand mosque to be built in it). Palestine remained under Arab/Islamic rule for over four and a half centuries when it was taken by the Crusaders in 1099. After less than a century, in 1187 AD, Palestine again came under Arab/Islamic rule under the Islamic commander Salah-El-Din the Great, who liberated Jerusalem from the Crusaders. Hence, from 1187 AD, Jerusalem remained under Arab/Islamic sovereignty till 1948 when the Zionist entity of Israel seized the western part of the city and then, in June 1967, the Zionist entity resumed its aggression and occupied the remaining eastern part of the Arab/Islamic Jerusalem.

Utmost reverence, care and attention have always been given to Jerusalem by Muslims in all eras. As a testimony of Muslim reverence to Jerusalem feats of architectural excellence were built. The Dome of the Rock gained architectural grandeur during the reign of Caliph Abdul Malik Ibn Marwan while the Al Aqsa Mosque during the reign of his son, Al-Waleed Ibn Abdul Malik. These Mosques are considered to be among the most magnificent feats of Islamic architecture some thirteen centuries ago. Also. The squares of the Holy Haram and the two mosques have been centers of learning that greatly contributed to enriching human knowledge and civilization. (And so were the Christian Holy Places).

More importantly, the thirteen centuries of Islamic rule over Jerusalem are particularly known for the religious tolerance of Muslims: the Jews and Christians enjoyed freedom of worship. This is owing to the fact that reverence for all the Prophets is a basic postulate of Islam.

All this changed with the Israeli usurpation and continued illegal occupation of Jerusalem and other Palestinian and Arab land. The once open city has been turned into violence and grief and its Arab inhabitants live in oppression, captivity and exile. Those who escaped death were either dispersed or terrorized while others coerced into changing their citizenship under threat of abuse or loss of land and property. On the other hand, the shrines and the Holy Places of Jerusalem – Muslim and Christian – have not been spared as they have been subjected to continued acts of profamation and desecration.

The circumstances surrounding the burning of the Al-Aqsa Mosque on 21st August, 1969 show that this despicable act is part and parcel of an Israeli-Zionist plot to destroy the Al-Aqsa and the nearby Dome of the Rock and rebuild on their site the Temple of Solomon and hence present to the world a fait accompli. In fact, prior to the act of arson against Al-Aqsa, Jewish religious leaders had been urging their government to confiscate Al-Haram Al-Sharif and all that it houses; steps were taken to expropriate and demolish Arab property in the vicinity of Al-Aqsa; the occupation of Bab Al-Maghariba, one of the gates of Al-Haram Al-Sharif leading to the Al-Aqsa Mosque; excavation around Al-Aqsa, etc.

Other Holy Shrines of Islam viz. the Omaniah Mosque have been affected by excavation works, and the Al-Ibrahimi Mosque in Hebron had been turned into a place of worship by the Jews, these are just two other examples to illustrate the attribute and policy of the Zionist entity.
Christian religious sites, viz. the Church of the Holy Sepulchre was desecrated in 1971; the Jews also committed profanity on the Holy Grave and broke the marble column, and stole the Crown of the Virgin Mary. The Roman Orthodox Church was also not spared.

Further, the Israeli occupying power had been taken legislative measures to annex the Holy City so as to create a de facto situation of what it calls ‘unified Jerusalem as the eternal capital of Israel’.

All these measures to change the character of Jerusalem are in complete defiance of United Nations resolutions on the question of Palestine and that concerning the “corpus seperatum” status of Jerusalem (Resolution 181 (ii) and 194 (iii). In condemning these Israeli actions, the United Nations has on numerous occasions declared them illegal, and null and void.
Indeed, numerous United Nations General Assembly resolutions have condemned Israel for:
(a) its annexation of Palestinian and Arab territories, including Holy Baitul Muqaddis;
(b) the establishment of Israeli settlements in occupied territories;
(c) the expulsion and deportation of Palestinians;
(d) expropriations of property and destruction of houses;
(e) mass arrests and ill-treatment of civilians;
(f) interference with religious freedoms and practices and family rights and freedoms;
(g) the desecration of Muslim and Christian Holy places;
(h) ill-treatment and torture of persons under detention

The Government and people of Malaysia have always been of the view that the inalienable human and national rights of the Palestinian people are the central issues in the West Asian conflict, and that there can be no lasting and just settlement of the conflict which ignores their rights, or excludes from participation, on an equal footing, their sole legitimate representative, the Palestine Liberation Organization. In face, Malaysia will continue to call on the international community to pressure Israel to withdraw from all Palestinian and Arab territories, including Holy Baitul Muqaddis, so that the rights of the Palestinian people to a sovereign state in their homeland is recognized and fulfilled.