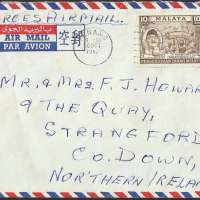 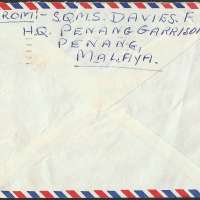 This was a special rate for troops and attached personnel serving abroad, having been introduced in Malaya on 1 April 1947, and was in existence throughout the Emergency. The 10 cents rate was also the local rate of postage (for the first ounce) the idea being, it seems, that troops serving abroad should not be put at any disadvantage compared to those at home in regard to postage costs involving their families.

There were conditions, however, amongst which was the stipulation that the concessionary rate extended only to the first half ounce, heavier letters having to pay the normal airmail fee which was 25 cents per half once.

The 10 cents letter rate was matched by one of 6 cents for postcard.