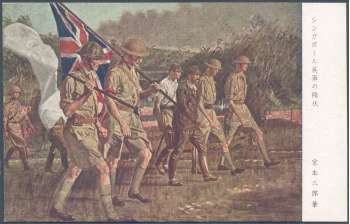 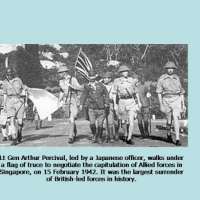 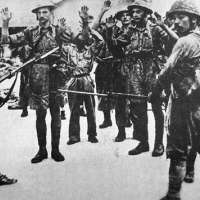 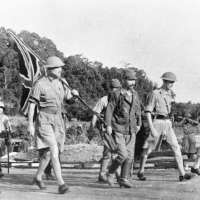 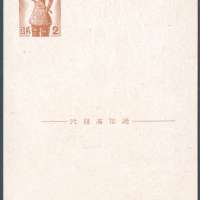 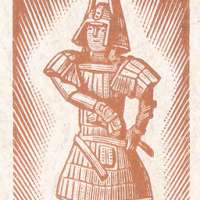 The Japanese were printing anti-British leaflets and posters in an attempt to attack and humiliate the white colonialists. One of it is an image of the surrender of Singapore that was produced both as a color postcard and as an aerial leaflet.

The postcard caption is, "The fall of Singapore - The East Asian fortress under the intrusion of the British for more than a century - fell on Showa 15th year, the 2nd month, on the 17th day at 6:40 p.m. In a single file, bearing white flags, the British officers of the Malayan Command approached our mighty army to surrender. From the right: Commanding Officer Malaya, Lieutenant General Percival; Chief of the General Staff, Brigadier General Torrance; Staff officer, Colonel Sugita; Interpreter, Ling-zhuan; Chief Administrator of the British High Command, Malaya, Major General Newbiggen, who is holding the Union Jack; and Captain Wylde who serves as interpreter."

The illustration was from a painting by Saburo Miyamoto.

'Surrender of the British troops at Singapore - Painted by Saburo Miyamoto'.
シンガポール英軍の降伏 宮本三郎筆

At bottom: Issued by the Ministry of Communications
逓信省発行

The reason this particular card is CC4c is that it is part of a set of 3, celebrating major Japanese victories during (the early part of) WW2. The issue date is Dec 8, 1943, which would have been 2 years to the day of the bombing of Pearl Harbor. The other two is Bombing of Pearl Harbor and Hong Kong Invasion.

There's Always A Story Behind A Photo

Yamashita took several days to conduct reconnaissance of Johore Strait and allow the troops to regroup prior to his assault on Singapore. During this time, the plan for invasion was developed. The Imperial Guards Division would make a feint attack to the northeast side of Singapore by landing on nearby Palau Ubin Island on 7 February. The 5th and 18th Divisions would remain concealed in the dense jungle until the evening of the 8th, when they would cross Johore Strait onto the northwest side of Singapore Island. Yamashita anticipated the campaign would be over within four days.

Although seemingly unstoppable, having conquered the 700 mile length of Malaya in 55 days, Yamashita was concerned about a possible protracted fight for Singapore. He had good cause to worry. He knew he could lose the upcoming battle for several reasons. First, he had lost over 4,500 personnel thus far and knew his remaining 30,000 men would have their hands full when facing the roughly 100,000 defenders of Singapore under GOC Lieutenant General A.E. Percival. Second, because of the exceedingly long supply lines, he had received little Japanese equipment since early in the campaign. The "Churchill stores" had been significant, but they could not hold out over a prolonged siege. Finally, his ammunition supplies were approaching critically low levels. Prolonged engagement would take him past culmination, and would bring about almost certain defeat. The battle for Singapore had to be finished quickly--and the British had to fall for his bluff.

My attack on Singapore was a bluff . . . I knew that if I had to fight long for Singapore,I would be beaten. That is why the surrender had to be at once. I was very frightened all the time that the British would discover our numerical weakness and lack of supplies and force me into disastrous street fighting

Japanese General Yamashita was outnumbered three-to one and was nearly out of ammunition by the time he reached Singapore. Instead of acting cautiously, he cut off Singapore's water supply and dropped leaflets demanding immediate surrender. The leaflet read:

The Japanese Commander to the British Commander.

In the spirit of chivalry, we have the honour of addressing you to surrender. Your Army founded on the traditional spirit of Great Britain, is defending Singapore which is completely isolated and raising the fame of Great Britain by the utmost exertions and heroic fighting. I disclose my respects from my innermost feelings.

Nevertheless the war situation is already determined and in the meantime, the surrender of Singapore is imminent. From now on, resistance is futile and merely increases the danger to the 1,000,000 civilian inhabitants without good reason, exposing them to infliction of pain by fire and sword.

Furthermore, we do not feel you will increase the fame of the British Army by further resistance. From first to last our counsel is that Your Excellency will cease to think of meaningless resistance, and from now on yielding to our advice promptly and immediately suspending the action extending over the whole British battlefront.

It is expected that you will take measures to dispatch an Army messenger as stated below . If on the contrary you continue resistance as previously, it will be difficult to hear with patience from a humanitarian point of view and inevitable, we must continue an intensive attack on Singapore.

Ending this advice, we show respect to your Excellency.

1. The Army messager's route of advance shall be by Bukit Timah Road.

2. The Army messenger hoisting a white flag as well as the British flag will be escorted by a number of soldiers as protection.

It was signed by Yamashita.

His bluff worked. When General Percival met with him hoping to negotiate, Yamashita blustered, demanded unconditional surrender and yelled, "Yes or no? Surrender of fight?" Percival had no idea that he had the stronger hand, and simply said "Yes."

2. Credit due to tonymacg from stampboards forum for the Japanese characters and English translations.

5. Update required regarding printer and method of printing.