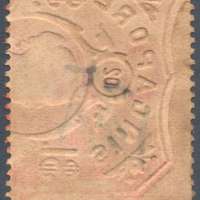 Diverse dealings such as probate, debt collection, marine insurance policies and all land and property transfers were taxed at various rates in Malaya as the colonies of the then British Empire in 19th century were required to be self-supporting.
Collectors of taxes and land revenues were amongst the very first Colonial administrators to be appointed and having collected the dues it was their duty to provide receipts. These were issued generally speaking, along the lines developed in England over several decades and consisted of embossed receipt marks, stamped official seals, and adhesive Revenue and Judicial stamps, some specific to a particular tax.
Judicials
The earliest Judicials are on similar Crown CC paper and have the values in violet on a brown background stamp. In 1870 this value color was changed to green and in 1874 the crown CC paper ran out and Crown CA was used.
These stamps go up to $100 face value and can be found on documents performing their duty of paying land transfer fees or probates.
Overprints on Straits Settlement Stamps
From 1880 some of the West Coast Malayan States, which were to be joined formally in Federation in 1896, had a need for State imposed stamp duties and the need for Revenue stamps was satisfied by the use of Straits Settlements stamps overprinted for use in each of those States. The most frequently found are from Selangor and these can be found in many different fonts and formats. Some read across, some upwards on the long stamps and some downwards. A very few surcharges as well.
Perak, the Tin State of Malaya, overprinted quite large numbers of the long Straits Judicial stamps.
In Sungei Ujong, Negri Sembilan and Pahang, states which also meged into the Federated Malay States, the 1882 and 1888 small vertical revenue issued were overprinted with the name of the State.
Towards the end of the 19th century a few other provisionals were issued, notably a Straits Postage and Revenue 8c surcharged 5c and letter 'J' for Judicial.
Conclusion
In the early 20th century, these Revenue stamps were generally replaced by Postage and Revenue stamps.
These Revenue Stamps and Judicial Stamps are not very well documented.

Catalog number based on Standard Catalog of Malaysia, Singapore & Brunei - Revenue Stamps & Postal Stationery cannot be determined as colour code provided are different than sample. But three catalog numbers are: