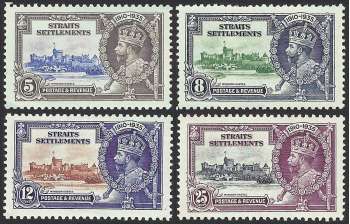 The idea of producing commemorative stamps to mark the Silver Jubilee of King George V originally came from the Colonial Office, with the suggestion that an identical set should be issued throughout the Empire on 10 May 1935. The Post Office was initially unenthusiastic, as work was underway on a new set of definitives, and it was known that the King did not particularly approve of commemorative issues.

However, the Director of Postal Services eventually agreed that this was the best way for the Post Office to participate in the Jubilee celebrations, and in June 1934 it was decided that four values, ½d, 1d, 1½d and 2½d, should be issued.

As this would be the first special issue to be produced by photogravure, which reproduces a number of graduated tones, designs were requested in shades of grey. The GPO suggested royal homes, buildings, scenes and events of Imperial significance as possible subjects.

Twelve designs were submitted unsuccessfully, but a second round of submissions produced one satisfactory design, which was by Barnett Freedman. This was essayed using alternative portraits of the George V, by Vandyk and Mackennel, and in two sizes. The King chose the Mackennel head, on landscape stamps twice the size of standard definitives.

The chosen colours corresponded with the definitives. Thoughts had been given to issuing the 2½d in turquoise (known to collectors as 'Prussian blue') instead of ultramarine: essays were produced, but the idea was abandoned. However, Harrisons inexplicably printed many sheets in the incorrect colour. Most were destroyed, but five were delivered to the Stores Department, and at least three were accidentally issued to Upper Edmonton Post Office, where they were sold in the normal way.

The stamps were issued on 7 May 1935 in sheets, and, with the exception of the 2½d value, in 2/- and 3/- booklets. The booklet panes comprised four stamps, and the covers were also designed by Freedman. The stamps were also overprinted for use in the Morocco Agencies and Tangier.