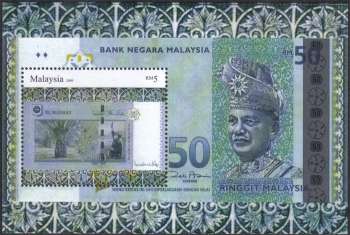 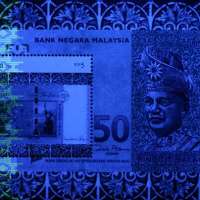 The reverse of RM50 banknote appears on the stamp, bearing serial number BE3603842. This note is the fourth series that was introduced on 26 December 2007 and sold as commemorative banknote and re-introduced to the public for regular issue on 15 July 2009.

Whilst the rest of miniature itself bearing the obverse of the RM50 banknote, with the theme of Songket and Tuanku Abdul Rahman, the first Supreme King, wearing tengkolok headgear. It was signed by Zeti Akhtar Aziz, the sitting governor of Bank Negara Malaysia.