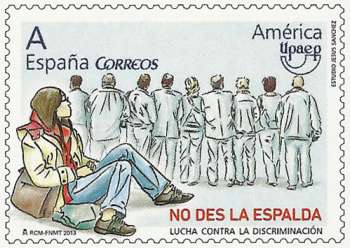 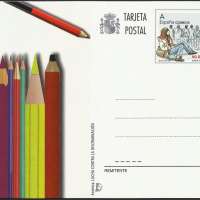 Printing: Offset, CYMK
CYMK / Four-color System: Four-color printing system based on a mix of four colors (cyan, magenta, yellow and black) in different proportions to obtain all other existing colors

Price: Tariff A (for addresses within Spain)

Each year, the member countries of the Postal Union of the Americas, Spain and Portugal (UPAEP) issue a stamp with a common theme, dedicated, on this occasion to the Fight Against Discrimination.
Discrimination means "treating a person or a group as inferior for racial, religious or political reasons, etc.” And that is the tenor of the Universal Declaration of Human Rights when, in article 2, it states that: “Everyone is entitled to all the rights and freedoms set forth in this Declaration, without distinction of any kind, such as race, colour, sex, language, religion, political or other opinion, national or social origin, property, birth or other status."

However, and despite the efforts made by the United Nations, international bodies, governments and other organisations to establish equality among people, discrimination remains present in the world and in society. There are characteristics which are inherent in a person, such as their origin, race or skin colour, which cannot be changed; but there are others which are learnt, such as religion, culture, ideology or social position (rich/poor), which can be changed and which must be addressed in order to avoid discrimination. In this regard, education is an essential tool in order to achieve tolerance and social diversity. The fight against racism, rejection, exclusion or xenophobia, the need for equality between the sexes and the equality of rights and obligations are some of the points to be inculcated among the young, to thus achieve a more plural, diversified society which eradicates discrimination.

In recent years, the European Union has launched different programmes to fight against discrimination, whose objectives include informing citizens of their rights and responsibilities, to take measures for those who suffer discriminatory injustice.