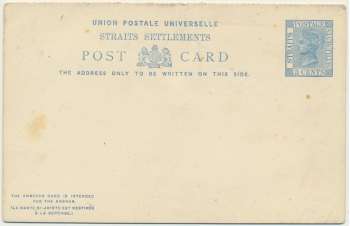 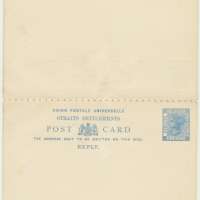 The text and indicium1 are in carmine.

The indicium1 shows the value of 3 cents, each for Post Card and Reply Card.

UNION POSTALE UNIVERSELLE
STRAITS SETTLEMENTS
POST CARD
THE ADDRESS ONLY TO BE WRITTEN ON THIS SIDE.

Print at the bottom-left:

On the reply card

STRAITS SETTLEMENTS
POST CARD
THE ADDRESS ONLY TO BE WRITTEN ON THIS SIDE.
REPLY.

The card's sign of age is evident but still not that bad. Probably from tropical climate.

Crease in the middle.