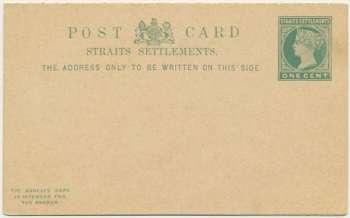 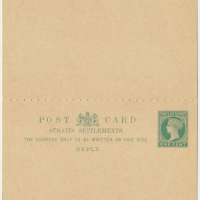 The text and indicium1 are in green.

The indicium1 shows the value of 1 cent, each for Post Card and Reply Card.

Print at the bottom-left:

THE ANNEXED CARD
IS INTENDED FOR
THE ANSWER.

On the reply card

POST CARD
STRAITS SETTLEMENTS
THE ADDRESS ONLY TO BE WRITTEN ON THIS SIDE
REPLY.