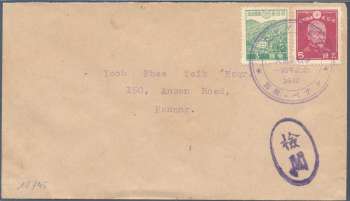 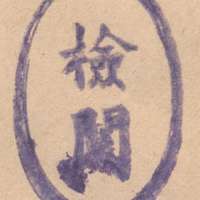 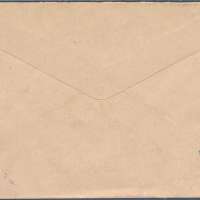 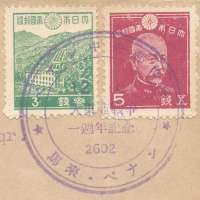 This is a postal cover used during Japanese Occupation in Malaya. It uses Japanese stamps that were authorised for usage in Malaya. On 8 December 1942, on the first anniversary of the start of the Pacific war, and five months before the pictorial definitives started being issued, the Japanese authorities issued four Japanese stamps in Malaya, for use there.

The commemorative cancellation dated 12 - 8 - 2602 in Japanese calender (December 8th, 1942) to celebrate First Anniversary of the start of the Greater South East Asia War when the Japanese troop first landed at Kota Bharu, Kelantan just after midnight of December 8th, 1941 (The Battle of Kota Bharu).

It has a stamp marking censor by the military:

The inscriptions on the stamps read right to left. Reversed, modern-style and with modern, simplified characters:


Special thanks to tonymacg (from Melbourne) for the Japanese characters.