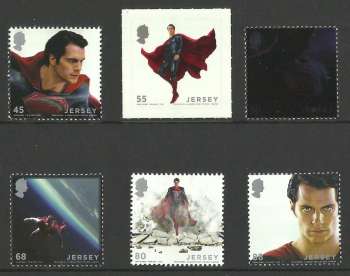 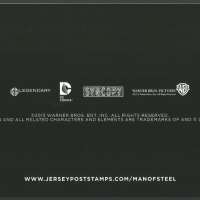 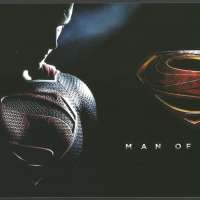 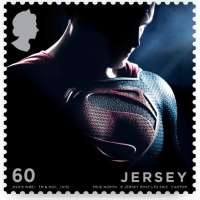 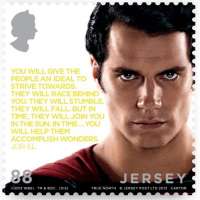 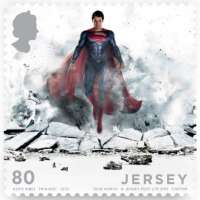 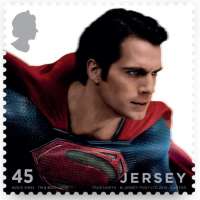 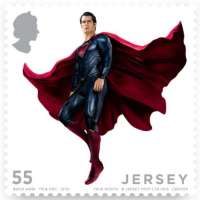 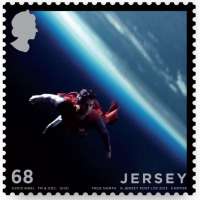 True North created the set of six stamps, priced at 45p, which have built on his various superpowers. The stamp set consists of 6 stamps featuring Superman's various super powers and a lenticular miniature sheet. They were created using a limited number of pre-launch film images, and True North says it ‘looked to build [Superman’s] superpowers into each stamp.’

The first stamp - 45p features a close up of Cavill, when scanned with a smart phone triggers an augmented reality app through Smartsy (which was also designed and developed by True North) which leads the user to the trailer and images of the film.

The fourth stamp - 68p, a Heat Sensitive stamp is printed with monochromic ink, which when warmed reveals the earth behind Superman.

The fifth stamp - 80p, features a thermographic stamp with crushed granite from Beauport Bay (which is Cavill’s favourite spot in Jersey) applied to give a rough tactile finish to the stamp which acknowlegdges the Man of Steel's strength.

The sixth stamp - 88p, features a hidden message from Superman's father Jor-El which is visible only in the dark (glow in dark invisible ink used).

The miniature sheet - £3 features a lenticular stamp which when tilted shows the Man of Steel flying across the stamp.

True North worked closely with Cartor Security Printing to develop the print techniques as each stamp uses a different finish or feature.

Sally Diamond, Head of Philatelic at Jersey Post said: "This is an incredibly exciting day for Jersey Post. We have produced a stunning set of stamps, which were inspired not only by a momentous cinematic occasion but also by the talent that this small island is capable of producing."

It was the first time Jersey Post had issued stamps for a Hollywood film.  She said the project had taken two years after approval from Henry Cavill's team and Warner Brothers. The stamps received Royal approval this month.

Henry's father Colin Cavill said: "Henry is very proud of his island roots and has been involved in the development of the stamps throughout."

Gary Caroll, business development director at Jersey Post said: "We hope that islanders will want to buy these products, not just for their collectible value, but also because they reflect another proud moment in Jersey's cultural heritage. Henry Cavill is not only a superhero, he is our local hero and we are delighted to mark his achievement in this way."

The new son of Krypton is, in reality, a son of the Bailiwick of Jersey.

Henry William Dalgliesh Cavill was born 5 May 1983, the second youngest of five boys to mother, Marianne and father, Colin. He attended St Michael’s Preparatory School, in the parish of St Saviour to the east of the island, and became Head Boy in his final year.

It is here that Henry first trod the boards in his debut acting roles, as he later explained “In Prep school, I really learned how to love the stage. When you step out from the wings into the lights, there’s this incredible rush of adrenaline and fear and anticipation; it’s just something else.”

St Michael’s is also renowned for its excellent sports facilities and achievements which may go some way to explain the origins of the Man of Steel’s imposing physique. Though, in truth, some credit must go to the super-strict work-out regime and six-month high calorie diet (including two months on an impressive 5000 calories a day) drawn up by the trainers at Gym Jones who got Henry into shape for the role.

As well as looking the part, Henry had to get ready to immerse himself into the role. And although Superman has been the hero of many films and TV shows, Henry went right back to the comic book superhero for his inspiration. “It’s really important to do the role justice. There are lots of people relying on me to do this well. I gladly accept this responsibility and it’s a great one to have, because it’s a wonderful opportunity.”

From Warner Bros. Pictures and Legendary Pictures comes “Man of Steel,” starring Henry Cavill (“Immortals,” TV’s “The Tudors”) in the role of Clark Kent/Superman, under the direction of Zack Snyder (“300,” “Watchmen”).

A young boy learns that he has extraordinary powers and is not of this Earth. As a young man, he journeys to discover where he came from and what he was sent here to do. But the hero in him must emerge if he is to save the world from annihilation and become the symbol of hope for all mankind.

“Man of Steel” is being produced by Charles Roven, Christopher Nolan, Emma Thomas and Deborah Snyder. The screenplay was written by David S. Goyer from a story by Goyer & Nolan, based upon Superman characters created by Jerry Siegel & Joe Shuster and published by DC Entertainment. Thomas Tull, Lloyd Phillips and Jon Peters are serving as executive producers.

The music is by Academy Award®-winning composer Hans Zimmer (“The Lion King,” “Inception”).