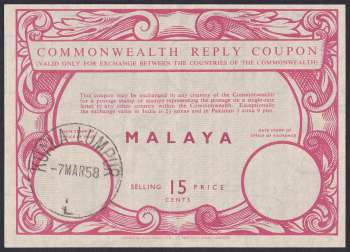 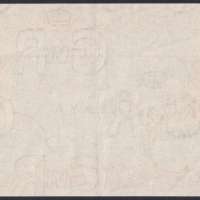 First Model: large oval design with scrolls on each side and issue/exchange circles at lower left or right, and blank on reverse.
Watermark: Crown and large double lined letters GVIR
Imprint: HARRISON AND SONS, LTD. ST. MARTINS LANE, LONDON
Fourth line in oval reads: the exchange value in India is 2½ annas and in Pakistan 1 anna 9 pies.

This coupon may be exchanged in any country of the Commonwealth
for a postage stamp or stamps representing the postage on an ordinary single-rate
letter to any other country within the Commonwealth. Exceptionally,
the exchange value in India is 2½ annas and in Pakistan 1 anna 9 pies.

All Commonwealth Reply Coupons were invalidated on 31 October 1975. Some countries ceased to honour them prior to this date.

The usual reason for which postal administrations cease to exchange Commonwealth Reply Coupons is the abolition of Commonwealth concessionary rates of postage for surface letters. Historically, this concession was introduced on social grounds, for the large volume of correspondence between friends and relatives living in the various countries of the British Empire. Over 80% of letters are now sent by Airmail and so the former social link argument for the concession has weakened accordingly. Countries are not obliged to inform the (British) Post Office of their reason for the withdrawal of the concession and generally do not. The Commonwealth Concessionary Rate was completely abolished (in Britain) on 17 March 1975, mainly because of financial considerations.
COMMENTS
NEW COMMENT