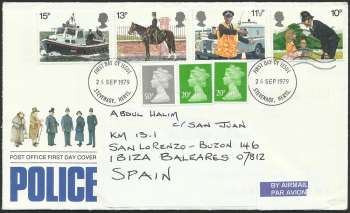 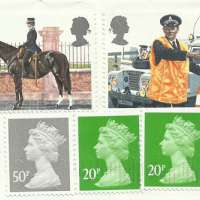 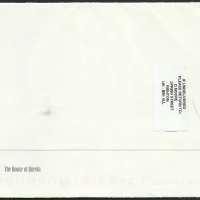 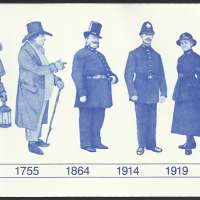 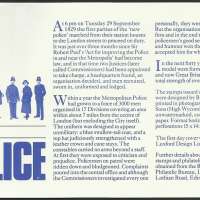 At 6 pm on Tuesday 29 September 1829 the first parties of the 'new police' marched from their station houses to the London streets to proceed on duty. It was just over three months since Sir Robert Peel's 'Act for improving the Police in and near the Metropolis' has become law, and in that time two Justices (later called Commissioners) had been appointed to take charge, a headquarters found, an organisation decided, and men recruited, sworn in, uniformed and lodged.

Within a year the Metropolitan Police had grown to a force of 3000 men organised in 17 Division covering an area within about 7 miles from the centre of London (but excluding the City itself). The uniform was designed to appear unmilitary: a blue swallow-tail coat, and a top hat judiciously strengthened with a leather crown and cane stays. The constables carried no arms beyond staff. At first they were exposed to criticism and prejudice. Policemen on patrol were ridden down and bludgeoned. Complaints poured into the central office and although the Commissioners investigated every one personally, they were accused of partiality. But the organisation was sound, discipline firm and in the end the London policemen's good sense, patience, courage and humour won the day and the public accepted him for what he was.

In the next forty years forces on the new model were formed all over the country and now Great Britain has 51 forces with a total strength of over 123,000.

The first day cover was designed by Luxford Design Limited.