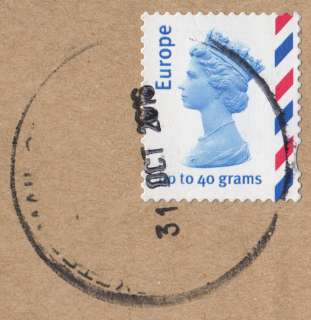 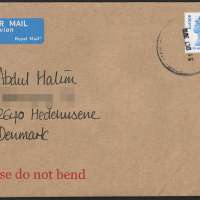 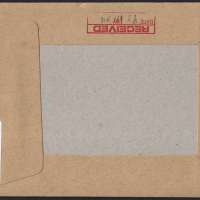 Europe 40g stamp sold for 52p. One eliptical hole in each vertical side. Only issued in booklet SG MI1. SG Colour = new blue and rosine.

Worldwide 40g stamp sold for £1.12. One eliptical hole in each vertical side. SG colour = Deep Mauve, New Blue and Rosine. Only issued in booklets SG MJ1 and MJ2. Printed by Walsall.

Worldwide Postcard stamp sold for 43p. One eliptical hole in each vertical side. Printed by Walsall. SG Colour = Gray-black, Rosine and Ultramarine.

The most radical change yet to the Machin design occurred in 2003 when Royal Mail issued the first of what were then called “universal stamps.” These non-denominated stamps for airmail service feature the Machin portrait of the Queen, though smaller than on regular definitives and with the portrait in a dark color on a white background, similar to the Millennium Definitive. The stamps have text at the bottom and upper left and a stripe of half-chevrons at the right. They were designed by Sedley Place.

Since Arnold Machin designed the whole stamp, not just the portrait, it is a bit of a stretch to call these stamps “Machins.” Indeed, Royal Mail does not do so (nor did it do so in the case of the Millennium Definitive, although many collectors called that stamp the “Millennium Machin”).

The first two stamps were the first to be issued, appearing on March 27, 2003. The postcard stamp followed a year later on April 1, 2004. The wording on the stamps makes their use very clear. The first stamp inscribed “up to 40 grams” and “Europe,” can be used to send letters weighing up to 40 grams to any destination in Europe by airmail. The second stamp, inscribed “up to 40 grams” and “Worldwide,” pays for similar letters to destinations outside Europe by airmail. The third stamp, inscribed “postcard” and “Worldwide,” can be used to send a postcard by airmail to any destination outside the U.K.

The International One-Stop stamps are sold in booklets of four. (Single stamps are made available to collectors in presentation packs.)