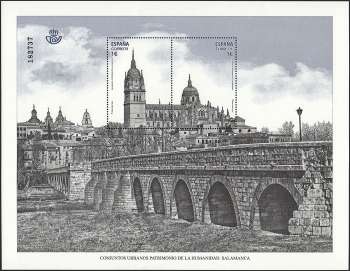 The city of Salamanca has been a UNESCO World Heritage Site since 1988 and it is also considered to be one of the most charming cities in Spain.

The Plaza Mayor is a good place to begin a tour of its historic centre, where there are pleasant surprises in every nook and corner. Considered to be the centre of the city's social life, it was designed by the architect Alberto Churriguera and built between 1729 and 1756. It was constructed because of the need to have a central square in accordance with the urbanistic trends of the period, where the City Hall was located. Nowadays, it is a habitual meeting place for local residents and tourists.

Salamanca is also home to the oldest university in Spain, and one of the four oldest in Europe, along with Bologna, Oxford and Paris. Its origins go back to the medieval Cathedral schools, around 1130, and by the 17th century it was already considered to be the most prestigious university in the country.

The city also conceals emblematic buildings such as the gothic-style Casa de las Conchas [House of Shells], built at the end of the 15th century. It gets its name from its façade which has over 350 scallop shells, the symbol of the Order of Santiago [St. James].

Salamanca is also well-known for having two cathedrals. The Old Cathedral was built in the 12th and 13th centuries with a Romanesque and Gothic style. Its outstanding features are its external appearance, which is like that of a fortress and the Gallo [Cockerel] Tower, with scale-like decorations. Construction work began on the New Cathedral in 1513 and it was consecrated 220 years later. Its outstanding features include its dome, decorated with scenes featuring the Virgin Mary and its façade, covered with strange decorations, such as the famous, enigmatic astronaut.

The miniature sheet issued as part of the Urban Ensembles World Heritage Sitesseries, shows a view of these cathedrals from the Tormes river, with the Roman Bridge in the foreground. Each of the two stamps in the composition contains one cathedral tower. This is an intaglio of a beautiful city landscape.