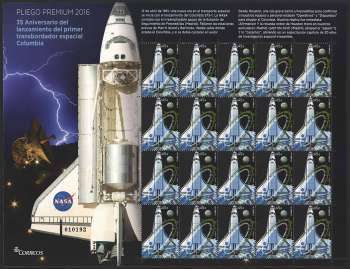 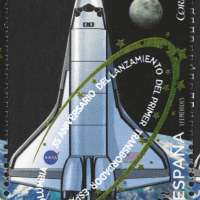 On 12 April 1981 the first space shuttle, Columbia, was launched. It orbited the Earth 36 times and returned home two days later. There were two crew members, the astronauts John W. Young as ship commander and Robert L. Crippen as pilot.

This launch marked various milestones in the history of space exploration. Apart from being the first shuttle launch, it was the first flight of its kind to be launched without any prior test flights.

The mission's main objectives were to check that the shuttle was working properly, to climb to the orbital altitude with no problems, to return to Earth and land without having any setbacks. All of these objectives were successfully achieved.

But Columbia's story ended in tragedy on 1 February 2003. After 15 days in orbit, the shuttle was coming back to Earth. During take off, it had been hit by a heavy object that caused serious damage, although this was not apparent at the time. When the ship was re-entering the Earth's atmosphere, the port wing broke off, causing the ship to lose control and break up in the air.

The ship's seven crew members lost their lives and all future space missions were immediately cancelled in order to investigate the causes of the accident.

The stamp issued to commemorate the 35th anniversary of its maiden flight is in the shape of the shuttle. It shows the ship against the background of the Earth seen from space, together with the moon.

The text reads "35th anniversary of Columbia, the first space shuttle's launch" alongside the NASA logo. It has the appearance of a space orbit and can be read both horizontally and vertically.