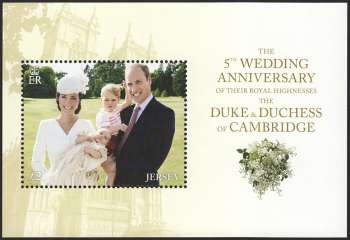 On 29 April 2016, The Duke and Duchess of Cambridge will celebrate their 5th wedding anniversary. Together, the Royal Couple have won the hearts of people around the world with their warm personalities and down to earth natures. In their first five years of marriage, they have embarked on a number of overseas tours and had two beautiful children, Prince George and Princess Charlotte.

Westminster Abbey, where the Duke and Duchess were married, can be seen in the background surround together with an image of the Duchess’ wedding bouquet which was made using Lily of the Valley, Sweet William, Hyacinth, Ivy and Myrtle.