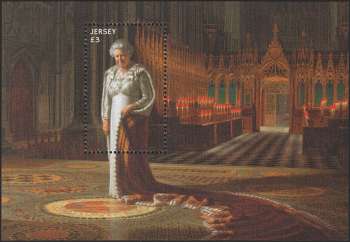 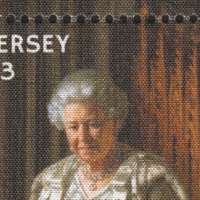 This spectacular Miniature Sheet has been printed on silk and features a painting by Ralph Heimans.

On 9 September 2015, Her Majesty Queen Elizabeth II becomes the longest reigning monarch in British history. Her great-great-grandmother Queen Victoria ruled for precisely 23,226 days, 16 hours and 23 minutes. Upon the death of her father King George VI in the early hours of 6 February 1952, Princess Elizabeth, aged 25, acceded the throne. She reaches the landmark date in 2015 at the age of 89 and to many, her longevity is a great source of inspiration, strength and resolve. She has reigned with her husband, the Duke of Edinburgh, by her side, through?the 20th century, the Millennium and into the 21st century. The Queen's popularity remains resolute to this day and millions of supporters and well-wishers all around the world have joined in her Royal Jubilee celebrations.

Westminster Abbey, situated close to the banks of the river Thames in London, has been the setting for every Coronation since 1066. The ceremony has essentially remained the same since that time and is conducted by the Archbishop of Canterbury, the senior bishop and principal leader of the Church of England. Alongside paintings, stained glass, pavements, textiles and artefacts, the Abbey houses the most significant single collection of monumental sculpture in the United Kingdom. A recent and contemporary addition, the painting by artist Ralph Heimans entitled The Coronation Theatre, Westminster Abbey: A Portrait of Her Majesty Queen Elizabeth II, was commissioned by Buckingham Palace to mark The Queen's Diamond Jubilee in 2012. The painting depicts The Queen in a contemplative pose. She is standing on the Cosmati pavement, the spot where every English monarch has been crowned since it was commissioned by King Henry III in the 13th century.
COMMENTS
NEW COMMENT