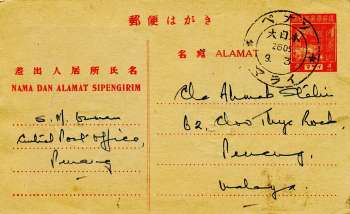 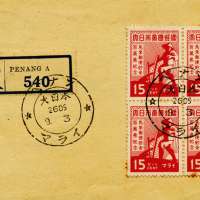 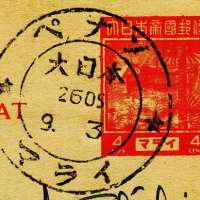 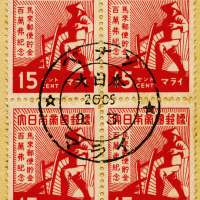 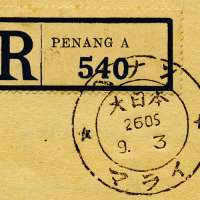 If the postmark was made on the 3 September 1945, then it is a unique use during the last days of Japanese in Penang.

Japanese forces in Malaya surrendered to the Allies firstly at Penang on 4 September 1945 aboard HMS Nelson then, after the Singapore surrender, at Kuala Lumpur on 13 September 1945.

On 12 September 1945, the British Military Administration (BMA) was installed in Kuala Lumpur and the postal services were only resumed a month after.

If this postcard was indeed genuine, not a post war production, then the sender must have not sending it as a commemorative due to the fact that those stamps were issued as commemorative back then in 1943. The stamps, a block of four were sticked on the back of the card, tied with Penang postmark.

The postcard also lacked a censor cachet, but perhaps it was deemed unnecessary considering there was no message written.

Post offices in Penang WERE indeed closed on 3 September 1945, therefore it is concluded that this particular postal stationery is a Philatelic Souvenir in nature.

A 4 cents postcard was issues on 29 April 1943. In the same stamp design as the 4 cents stamps, the wording is also in red. Most of the card are on quite flimsy light-weight card, which is watermarked: ‘Government Printing Works Singapore’. The watermark extends across several cards, so a card may have part of it or a straight line or no visible watermark. The watermark tells where the card came from and probably where the postcards were printed. A vast number of these cards were printed and used postally. ​

The address is still exist in Penang and known as

Depicting Tin Dredging as tin mining was the main industry of Malaya, being the world's biggest producer before the World War II.

A very big thank you to Thomas Slemons for the postcard which I really appreciate. Very interesting because this is the first postcard I have that was written in Chinese. Internal Reference: TOM-5

Gratitude to Mimi Chang for the Chinese texts read on the stamp.