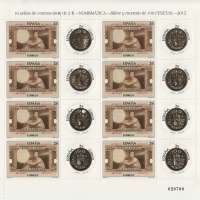 For the second year in a row, two stamps are being issued in the Numismatics series.  This time the stamps will picture the back of the 100 peseta banknote and coin. The cool stamping technique has been incorporated into printing system to simulate the metallic coins.

The 100 peseta banknote picturing Cordoba painter Julio Romero de Torres was in circulation between 1953 and 1978. The backside featured an image of the artist's oil painting La Fuensanta, which uses brown tones to represent a seated young girl looking directly at the viewer with her arms resting on a large silver pitcher. Featuring simple clothing, the work's points of light focus on the woman's face, arms and torso as well as the centre of the jug.

The model was named María Teresa López and she was a mere 15 years old when Romero de Torres painted her portrait in 1929. Months later she again sat as a model for his last and most well-known work, La chiquita piconera. Contrary to what one might think, she spent her entire life tormented by the gossip and malice of people who accused her of having been the painter's lover. She died in 2003 at 89 years old.

The banknote was made from a black and white photo that Romero de Torres himself had taken of the painting before showing it at the Ibero-American Exposition of 1929 in Seville. After that, nothing was known of the painting until 2007 when it was auctioned at Sotheby's in London for more than a million euro. The image of the model on the 100 peseta banknote hit a record: almost a billion banknotes were issued.

The 100 peseta coin pictured on the stamp is from 1992 and was minted again between 1998 and 2000. It is made of a bronze and aluminium allow with a weight of 9.25 grams and 22 lily flowers around the edge. It features a crowned "M" mint mark, for Madrid.

There was a previous 100 peseta coin issued from 1982 to 1990 that was identical to what appears on the stamp; the only difference was that the amount is written in numerals instead of letters and is flanked by two printed dots. Its iconography includes the face value of the coin and the coat of arms of Alfonso XII and Alfonso XII. A total of 22,661,000 of these coins were brought into circulation. This and other 100 peseta coins were known in popular slang as veinte duros since the informal designation of duro corresponded to five pesetas. Just as before the Spanish Civil War people spoke in reales, after the war it was duros.