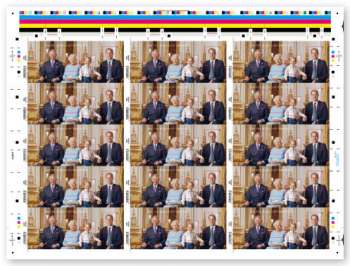 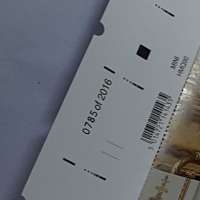 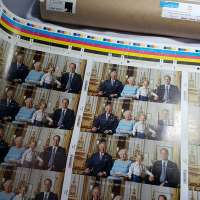 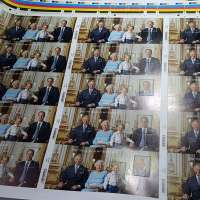 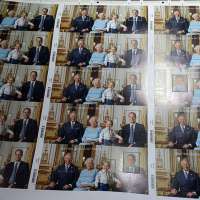 One for true aficionados, the Press Sheet comprises 15 Her Majesty The Queen’s 90th Birthday Miniature Sheets. Numbered, limited edition of 2016. Delivered in a special tube.

A Stamp Sheet features four generations of the House of Windsor, photographed for Royal Mail by Ranald Mackechnie.

The specially commissioned family portrait was taken in the summer of 2015 in the White Drawing Room at Buckingham Palace. It features HM The Queen, HRH The Prince of Wales, HRH The Duke of Cambridge and HRH Prince George of Cambridge. This is the first time Prince George has appeared on a Royal Mail stamp.

Photographed by Ranald Mackechnie in the summer of 2015 for Royal Mail, the specially commissioned Stamp Sheet features a family portrait of four generations of the House of Windsor: HM The Queen, HRH The Prince of Wales, HRH The Duke of Cambridge and for the first time on a Royal Mail stamp, HRH Prince George of Cambridge. The photograph was taken in the White Drawing Room at Buckingham Palace.

The perforations in the Stamp Sheet are positioned to create a postage stamp for each member of the Family.

The family stamps include an image of The Queen with her children, the young Prince Charles and Princess Anne. A stamp with the Duke of Edinburgh marks their long partnership. This is also the first time Royal Mail has issued a stamp featuring The Queen with her father.

The three remaining stamps mark The Queen’s official duties: as Head of State for the opening of Parliament; as Head of the Commonwealth where she is depicted with Nelson Mandela; and on a state visit to New Zealand. The images represent more than 100 state visits made worldwide by Her Majesty since her accession.

Today, The Queen, accompanied by The Duke of Edinburgh, will visit the Royal Mail Windsor delivery office on William St, Windsor. This visit will mark the 500th Anniversary of the Postal Service.

Her Majesty will be presented with the first in a limited numbered edition of 90 framed sets that bring together stamps issued to mark significant achievements of HM The Queen over the years.

The photoshoot - behind the scenes

Royal Mail had to consider a number of factors in the planning of the photoshoot.

Photographer Ranald Mackechnie, was chosen due to his excellent use of light in his work and specialist portrait skills. Ranald had worked with the Royal Mail design team many times; however, this was the first time his work would feature on a stamp.

The team looked at a range of rooms within the Palace and originally selected the Yellow Drawing Room as it was the preferred choice of the photographer. However, after reviewing the initial test shots, the team felt that the White Drawing Room would best capture the sense of this special portrait, without overpowering the actual photograph.

Another challenge was the height difference within the group.

For both aesthetic and technical reasons Prince George couldn’t be positioned much lower within the photograph. The position of each portrait within the miniature sheet was critical due to tight technical constraints.

The team undertook an initial recce of locations within the Palace and then conducted two half-day test shoots using the high density foam blocks that Ranald has as part of his kit. This ensured the shot could be composed as much as possible prior to the final shoot, which took about 25 minutes.

Using the blocks enabled the Prince to be lifted into the frame so it was a more intimate grouping.

Her Royal Highness Princess Elizabeth of York was born into a world where memories of her great-great-grandmother, Queen Victoria, were still fondly held, at a time when the First World War remained painfully fresh in people’s minds.

Little more than 25 years later, the Princess would become Queen.  In time, she would see it all for herself, as no other monarch has visited more countries or met more of her subjects than Queen Elizabeth II. As the longest-reigning sovereign in British history marks her 90th birthday, the Kingdom that she represents is very different from the one she inherited in 1952. But whatever the changes or upheavals, there has always been one constant at the heart of national life – The Queen herself.

Most British people did not imagine that the newborn daughter of The Duke and Duchess of York would, one day, be their Queen. Born on 21 April 1926, Princess Elizabeth was joined by a sister, Princess Margaret Rose, in August 1930. The girls enjoyed a happy childhood, alternating between London, Windsor, Sandringham and Balmoral – much as Her Majesty does today. Their lives, though, would be transformed by the abdication crisis of 1936, and the subsequent coronation of King George VI. The pressures on them were soon compounded by the Second World War, during which the whole family would become a symbol of national fortitude. Come the hard-won victory, the strain of office had taken a heavy toll on George VI.

Princess Elizabeth’s marriage to Philip Mountbatten in November 1947 was a welcome cause for national celebration, as was the arrival of a son and heir, Prince Charles, a year later. But the young couple were soon required to assume more and more of The King’s duties. In February 1952, his early death handed the crown to a 25-year-old mother-of-two. Royal duties would inevitably place great demands on the young Queen but there was always time for family life, especially after the birth of two more children.

Little more than 13 years after the birth of her youngest child, Prince Edward, The Queen would become a grandmother in her Silver Jubilee year, following the birth of Princess Anne’s son, Peter Phillips. Today, The Queen and The Duke of Edinburgh are proud great-grandparents five times over.

Queen of the UK and 15 Commonwealth nations, Her Majesty is the epitome of duty and regal authority in public, while in private she is seldom happier than when surrounded by her family, preferably in the countryside.

Like her favoured surroundings, her interests and passions have changed little over the years. The monarch who loves blending in with the crowd at the Royal Windsor Horse Show every spring is as enthusiastic as the young Princess who won her first competition at the same event as a teenager. The eagle-eyed racegoer scanning the field at Ascot or Epsom is as well informed as the expert breeder who was Britain’s leading racehorse owner in 1954.

From childhood to the present day, dogs have also been an ever-present feature of The Queen’s life. Welsh corgis are a particular favourite, as well as a corgi-dachshund cross known as a ‘dorgi’. Less well known, perhaps, is her skill at working the gundogs that she breeds at Sandringham, some of which have gone on to be champions. Her love of animals is also reflected in her taste in art, for as well as being custodian of the treasures in the Royal Collection, The Queen is an enthusiastic collector of paintings of birds.

When it comes to holidays, Her Majesty is seldom happier than when in the Scottish Highlands. Since childhood, she has spent part of the summer at Balmoral, but it is much more than a place for relaxation. With a Scottish mother and being twice descended from Robert the Bruce himself, Her Majesty feels as much at home here as anywhere else on Earth.

Wherever she is in the world, The Queen is always on duty. Her Majesty never stops being the Head of State, Fount of Justice, Defender of the Faith, Head of the Armed Forces, Head of the Commonwealth, Head of Nation and much else. As she herself acknowledged in a speech broadcast to the Commonwealth on the day she turned 21: “My whole life, whether it be long or short, shall be devoted to your service”. These words concluded an historic speech which, at the time, was said to have reduced former Prime Minister Winston Churchill to tears.

To this day, the words are still widely quoted – for they remain as true on the occasion of The Queen’s 90th birthday as they were on her 21st. Indeed, Poet Laureate Carol Ann Duffy included them in ‘The Crown’, a poem specially commissioned for the service at Westminster Abbey on 4 June 2013 to mark the 60th anniversary of The Queen’s Coronation.