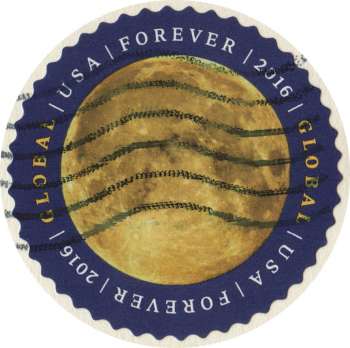 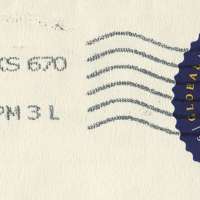 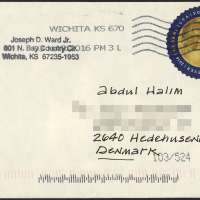 New Moon Stamp Is Out of this World

WASHINGTON — Lovers of the night sky will be beaming now that the Postal Service has introduced the new $1.20 Moon Global Forever international rate stamp. This round stamp features a detailed photograph of the moon which captures the brilliant surface of Earth’s only natural satellite.

The selvage, or area adjacent to the stamps, features a tree line silhouetted against the night sky. The text that is repeated twice around the circumference of the stamp reads “GLOBAL USA FOREVER 2016.”

The art director was William J. Gicker of Washington, DC. Greg Breeding of Charlottesville, VA, illustrated the selvage and designed the stamp with an existing photograph of the moon taken by Beth Swanson of Ft. Lauderdale, FL.

Earth’s Natural Satellite
As Earth’s only natural satellite, the moon has long had considerable impact on mankind. Its gravitational pull creates ocean tides and affects our planet’s motions. The moon and its regular lunar phases have also served as important social, spiritual and mythological influences on various peoples throughout history.

Full moons provide fascination for many cultures and are the subject of a variety of folktales. Due to the regularity of full moons, which occur approximately every 29.5 days, several of them even have names and cultural characteristics associated with them. A full moon occurs when the moon is opposite the sun, with Earth between the two. From our planet, the visible surface of the moon appears fully illuminated and larger than anything else in the night sky. Since the rotation and orbit periods of the moon are the same, the same part of the moon is always seen from Earth.