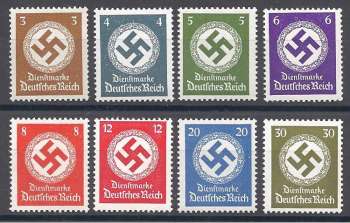 Issues of the Republic

Deutsches Reich was the official name for Germany from 1871 to 1943 in the German language, it translates literally in English to "German Empire" and appropriately "German Realm".

In 1920 the Official Stamps of Bavaria and Wurttemberg then current were overprinted “Deutsches Reich” and made available for official use in all parts of Germany. They were, however, used almost exclusively in the two states.

Missing from the set: