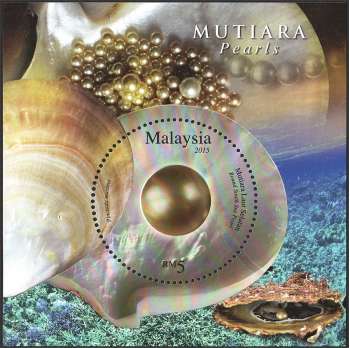 Face Value
RM 5.00
Issued Price
RM 5.30
Issued Date
29/07/2015
Designer
Reign Associates Sdn Bhd
Printer
Southern Colour Print Ltd, New Zealand
Printing Method
Lithography
Gum
Gum
Dimension
80 × 80 mm
IN COLLECTION CONDITION
Preliminary
Normal
Condition
Mint Never Hinged - Extra Fine
Malaysia - Pearls (2015) MS MNH
The crystal clear and calm blue seas in Sabah are filled with all kinds of wonderful marine life, and kong the most interesting is a type of mollusk known as oysters. The oyster is an animal with a relatively flat and hard shell. They are considered a great delicacy in many parts of the world. However, there is a type of oyster that is highly valued because it produces an extraordinary 'jewel' hidden beneath its shell in what we know as a pearl. In nature, pearl oysters produce pearls by covering a minute invading parasite with nacre. Over the years, the irritating object is covered with enough layers of nacre to become a pearl.

The alluring beauty of the natural pearl have been highly sought after and was hunted by humans for centuries to be used as jewellery. Natural pearl oysters in the waters of Sabah have been threatened to near extinction due to over-hunting and environmental pollution. During the 1980s, extensive research has led to the discovery of ways to produce cultured pearls via pearl oyster farming. A dedicated pearl oyster farmer in Semporna, Sabah has over 2 generations perfected the art of producing cultured pearls - thus not only saving the pearl oysters from extinction, but also producing one of the world's finest and largest south sea pearls. the species found naturally in the waters of Sabah and used for pearl culture is the Pinctada maxima.

Pinctada maxima is a species of pearl oyster, a marine bivalve mollusk in the family Pteriidae. These bivalves are the largest pearl oysters in the world and can measure up to 12 inches in diameter. They have a strong inner shell layer composed of nacre, also known as 'mother of pearl'. They are important in the cultured pearl industry as they are used to produce south sea pearls. Pinctada maxima can be found in the waters of the southern seas such as Malaysia, Australia, Fiji, Tahiti, Indonesia and the Philippines.

South sea pearls are recognised as the world's largest and most valuable pearls compared to the other main group of pearls such as the Akoya pearls, Tahiti black pearls and fresh water pearls. South sea pearls are obtained from Pinctada maxima farmed in Sabah waters where the pearls formation process begins by placing nucleus into the pearl oysters. In three to six years, these pearl oysters will produce a range of cultured pearls with varying quality, size and colour depending on the natural pigment of the nacre, and the shape of the original irritant. Malaysia's south sea pearl size varies between 10 mm to 20 mm, and its various shapes can be classified into 5 main recognised forms, which is round, drop, baroque, circle and button. The colours of the pearls ranges from white, champagne gold and gold. These pearls are made into highly valuable jewellery such as pearl necklaces, pearl rings, pearl earrings and so on.