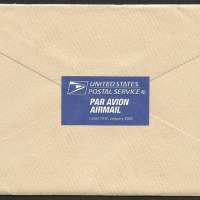 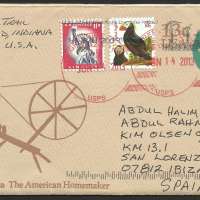 It is one of the 1975-76 series of stamped envelopes depicting important occupations during the colonial period.

U.S. #1044A was issued to meet a new international surface mail rate that went into effect on 1 July 1961. According to the deputy postmaster general at that time, “This stamp reaffirms to all the nations of the world, friends and enemies alike, the United States’ determination to preserve the American tradition of political and religious freedom.”

The Statue of Liberty is a magnificent copper sculpture given to the United States by France in 1884. On October 28, 1886, the statue was dedicated. Its complete name is Liberty Enlightening the World. This majestic symbol of the United States, representing freedom for immigrants coming to America as well as the bond of freedom shared between the United States and France, stands above Liberty Island at the entrance to New York Harbor in Upper New York Bay.

The people of France donated the money to build the statue, and the people of America raised the funds to build its base. The French sculptor Frédéric Auguste Bartholdi designed the statue and chose its location. Alexandre Gustave Eiffel, the French engineer who later built the Eiffel Tower in Paris, designed the statue’s framework. The statue stands 301 feet and 1 inch high from foundation to torch.

In the early 1980s, a program was started to make major repairs and improvements to the statue. This effort concluded in 1986 – the 100th anniversary of the Statue of Liberty’s dedication in the U.S. A popular tourist attraction, the statue attracts about 2 million visitors each year.

Issued to replace the 1938 Presidential series, this patriotic set of stamps honors guardians of freedom throughout U.S. history. Eighteenth century America is represented by Revolutionary War heroes and statesmen such as Washington, Jefferson, Franklin, Hamilton, Henry, Jay, and Revere.

Leaders of the 19th century including Monroe, Lincoln, Lee, Harrison, and Susan B. Anthony make an appearance. The 20th century is represented by Teddy Roosevelt, Woodrow Wilson, and General Pershing.

Stamps produced by dry printing can be distinguished by whiter paper and higher surface sheen. The stamps feel thicker and the designs are more pronounced than on wet printings. So the dry printing experiment was a success, and all U.S. postage stamps have been printed by this method since the late 1950s.

With the Tufted Puffin 86-cent stamp, the U.S. Postal Service celebrates the tufted puffin (Fratercula cirrhata), an unmistakable bird named for the striking tufts of long, yellow feathers that grow from the sides of its head during breeding season. Looking a bit like a punk rock haircut, the tufts accent the bold coloring of the bird's black body, white facial mask, and bright orange bill and webbed feet.

Puffins, also known as sea parrots for their large bills, are diving birds in the auk family. The tufted puffin is the largest of the three puffin species, standing roughly 15 inches tall. Found on the open ocean, islands, and coastal areas of the North Pacific, the tufted puffin's true home is the sea, as it hunts underwater and spends most of its life far from land. The birds have adapted to an unusually broad range of ocean habitats, raising their young anywhere from southern California to arctic Alaska. In the United States, tufted puffins can be also found in Oregon and Washington.

The Tufted Puffins stamp is designed for heavier single-piece First-Class Mail weighing more than two ounces and up to and including three ounces. The Tufted Puffin stamp is being issued in self-adhesive sheets of 20.