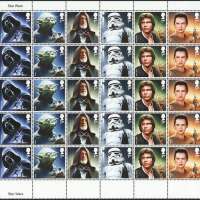 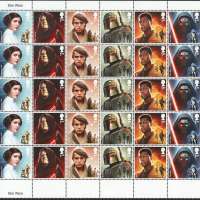 The 35mm square stamps are designed by Interabang using illustrations by Malcolm Tween, and printed in lithography on ordinary gummed paper by International Security Printers in two sheets of 60 stamps.

The 192 x 74 mm miniature sheet is designed by GBH and printed in lithography on self-adhesive paper by International Security Printers.

The series began in 1977 and so far there have been two trilogies of movies. December 2015 will see the theatrical release of the Episode 7 - The Force Awakens, which has been filmed at Pinewood Studios, Buckinghamshire, using British expertise in cast and crew, and the two further episodes in this final trilogy will be filmed in the UK.

The producers of the new movies decided to return to a British studio and crew whose expertise and professionalism contributed to the success of the earlier films. The new film, The Force Awakens, will reunite the three US principle actors from the original trilogy, reprising their iconic roles, as well as the robots R2-D2 and C-3PO and the alien Chewbacca. New characters will be introduced, many of which are played by British actors and include Daisy Ridley and John Boyega (both cast as leads).

From the very beginning British talent has featured strongly among both the acting and production talent including David Prowse, Darth Vadar; Alec Guiness and Ewan McGregor, Obi Wan Kenobi; Anthony Daniels, C3PO; Kenny Baker, R2D2; Iain McDairmid, Emperor Palpatine; Christopher Lee, Count Doku; Peter Mayhew, Chewbacca; and many others including Liam Neeson, Peter Cushing and Terence Stamp. The British connection also extends behind the camera with world leading British talent and from Costume to Special Effects. Disney’s decision to base production in the UK is a major contributor to the British Film Industry. Not only is it providing employment and exposure for British acting talent, it also employs the British technical expertise of Pinewood studios from set design and cinematography to costume design. In the field of digital special effects,

London is already a world centre, and the effects for the new Star Wars film have been created by the London office of Industrial Light and Magic (Lucasfilm’s effects company). The UK is the third largest market in the world for the Star Wars films, and the new stamps both reflect the passion of the British public for the movies, and celebrate the major British contribution to the film series and the global success of the British film industry.

The fearsome black-armoured figure of Darth Vader emerged when Anakin Skywalker fell to the dark side of the Force and fought his own Jedi Master, Obi-Wan Kenobi, on the volcanic planet Mustafar.

DARTH VADER (played by David Prowse, voiced by James Earl Jones) Darth Vader was once a Jedi Knight but was seduced to the dark side of the Force and became a Sith Lord. Vader served the Emperor for many years until, just moments before his death, he realised the terrible tragedy of his life.

The wise and powerful Jedi Master Yoda presided over the Jedi High Council before the dark days of the Empire. His origins, even his species, are shrouded in mystery, though it is known that he trained Jedi for more than 800 years.

YODA (voiced by Frank Oz) Small in size but supremely powerful in the Force, Jedi Master Yoda trained many Jedi Knights, including Luke Skywalker. In addition, he served as a member of the Jedi Council, using his vast wisdom to fight the Empire

Jedi Master Obi-Wan Kenobi trained the young Anakin Skywalker and served alongside him in the Clone Wars against the emerging Empire. Unfortunately, he was unable to prevent Anakin’s fall to the dark side.

OBI-WAN KENOBI (played by Alec Guinness) A Jedi Master of great skill and bravery, Obi-Wan Kenobi trained Anakin Skywalker and was one of the few to escape Anakin’s purge of the Jedi Order. He initiated Luke Skywalker into the ways of the Force.

White-armoured Stormtroopers were the feared soldiers of the Empire, used to subdue populations across the galaxy and charged with seeking out and defeating any suspected Rebel fighters.

STORMTROOPER The white-armoured soldiers and shock troops of the Empire, stormtroopers were originally clones of the legendary warrior named Jango Fett. Non-clone recruits swelled their numbers during the days of the Empire.

A long-time smuggler and rogue, Han Solo fell in with the Rebel Alliance after meeting Luke and Leia Skywalker. His legendary piloting skills in his ship the Millennium Falcon played a pivotal role in battles against the evil Galactic Empire

HAN SOLO (played by Harrison Ford) A smuggler by trade, Han Solo lived on his wits until he met Luke Skywalker and Princess Leia Organa and was persuaded to join the Rebel Alliance, taking part in some of its finest battles against the Empire.

Three decades after the Battle of Endor, Rey makes a living by scavenging on the desert planet Jakku. However, she soon finds herself catapulted into the heart of a new crisis in the galaxy.

REY (played by Daisy Ridley) Three decades after the Battle of Endor, Rey makes a living by scavenging on the desert planet Jakku. However, she soon finds herself catapulted into the heart of a new crisis in the galaxy.

Twin sister of Luke Skywalker, Leia escaped detection by her father, Darth Vader, and became the leader of the Rebel Alliance, which eventually brought about the destruction of the Empire.

PRINCESS LEIA (played by Carrie Fisher) Adopted as a baby, Princess Leia became a senator for Alderaan and leader of the Rebel Alliance. She was fiercely devoted to the Rebel cause, and her resolve became even stronger when the Empire destroyed her home planet.

The Emperor was a Sith Lord, a user of the deadly dark side of the Force, who ruled the galaxy with an iron hand. For a long time, as Senator of Naboo and then Supreme Chancellor of the Republic, he escaped all suspicion; even the Jedi were blinded by his deception.

THE EMPEROR (played by Ian McDiarmid) At first, Palpatine appeared to be a kindly politician, but his secret identity as a deadly Sith Lord, Darth Sidious, was finally revealed when he took control of the galaxy and began to rule it as the Emperor.

Luke Skywalker’s uncle and aunt raised him on the desolate and remote planet Tatooine. When it was discovered that a droid bought by Luke’s uncle contained a message from Princess Leia, Luke embarked on a journey into a new, exciting world.

LUKE SKYWALKER (played by Mark Hamill) The son of Anakin Skywalker, Luke was hidden from his father on Tatooine until he met Obi-Wan Kenobi and learned the ways of the Jedi, joining the Rebellion and playing a key part in the fight against the Empire.

With a reputation as the best bounty hunter in the galaxy, Boba Fett got paid handsomely to track down – and, often, kill – wanted individuals. Encased in battered Mandalorian armour, bristling with secret weapons and a jet pack, Fett always brought in his bounty.

BOBA FETT A genetic clone of his father, Jango Fett, and one of the most feared bounty hunters in the galaxy, the legendary Boba Fett worked for many paymasters, including the Empire and various clients in the criminal underworld.

Finn was a Stormtrooper in the forces of the First Order until he got stranded on the planet Jakku. There, an unlikely alliance with local scavenger Rey starts a chain of events that will affect the fate of the entire galaxy.

FINN (played by John Boyega) Finn was a stormtrooper in the forces of the First Order until he got stranded on the planet Jakku. There, an unlikely alliance with local scavenger Rey starts a chain of events that will affect the fate of the entire galaxy.

As the First Order emerges from the remnants of the defeated Empire, Kylo Ren becomes a new symbol of terror, with his dark hood and cloak and his mastery of a new kind of lightsaber with three red blades.

KYLO REN (played by Adam Driver) As the First Order emerges from the remnants of the defeated Empire, Kylo Ren becomes a new symbol of terror, with his dark hood and cloak and his mastery of a new kind of lightsaber with three red blades.