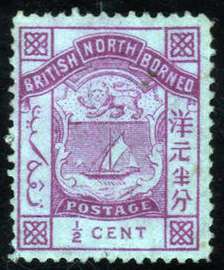 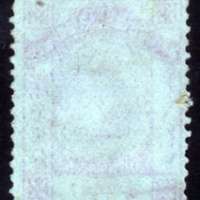 The spelling in Jawi reads: 'Tengah Sen' which in modern Malay should be read as 'Setengah Sen'

James Brooke, appointed Consul-General to the Sultan of Sulu in 1849, signed a treaty of friendship in 1849 leading to trade and eventually to the formation in 1882 of the British North Borneo Company. The settlements were made a British Protectorate in 1888 and Labuan attached to it in 1890-1906. After Japanese occupation (January 1942 - 10 June 1945) and British military administration, North Borneo had colonial status restored on 15 July 1946. On 16 September 1963 it became part of the Federation of Malaysia and changed its name to Sabah.

From 1882 channelled mail either through Labuan or Singapore using stamps of Straits Settlements in combination with local stamps. North Borneo joined the UPU in February 1891.

Initially, mail from North Borneo was sent via Labuan or Singapore, using postage stamps of the Straits Settlements. The company issued its own stamps in 1883, using a design incorporating the coat of arms (a dhow and a lion), inscribed "NORTH BORNEO", and with the value written in English, Jawi, and Chinese. Initial values included 2c, 4c, and 8c, followed by large 50c and $1 stamps of a more elaborate design with the arms flanked by two natives.

In 1886 ½c, 1c, and 10c values were added, and there was a demand for 3c and 5c stamps, resolved by overprinting existing types. At the same time, the printers (Blades, East, and Blades of London) produced a new design, largely the same but inscribed "BRITISH NORTH BORNEO", and joined by 25c and $2 values, also with elaborate frames. The stamps were redesigned again in 1888, to say "POSTAGE & REVENUE" instead of just "POSTAGE", at which time the 25c to $2 values also received minor changes. These were followed up in 1889 by even larger and more elaborate $5 and $10 stamps.