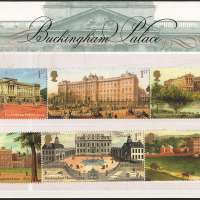 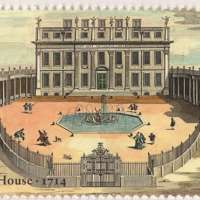 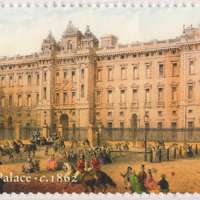 Royal Mail commissioned the artwork used for the 2014 stamp. The watercolour was painted by the artist Chris Draper. Six stamps explore the different appearance of this iconic building over the centuries.

Buckingham Palace serves as the official home of the Queen as Head of State of the United Kingdom. It is one of the few remaining working royal palaces in the world today and provides the setting for ceremonies and formal entertaining. Investitures, state banquets, garden parties and diplomatic receptions all take place here, as does the Prime Minister’s weekly audience with the Queen. It is arguable one of the most recognised buildings in the world.

The history of Buckingham Palace can be traced back to the early 17th century, when a mulberry garden was established on the site to breed silk worms. A house built near the garden for Lord Goring in 1633 was replaced, after a fire, on a larger scale by the next occupant, Henry Bennet, Secretary of State to King Charles II and later first Earl of Arlington. In 1698, Arlington House was acquired by John Sheffield, who was created Duke of Buckingham in 1703.

It was the Duke of Buckingham who transformed the site by demolishing the existing building and erecting an ambitious brick house with a three-storeyed central block and flanking pavilions. King George III purchased the building but it was George IV who decided to convert it into a palace, his chief residence.

This basic plan of Buckingham House formed the core of the future palace and dictated all subsequent development. Facing the Mall – the grand tree-lined avenue running along the north side of St James’s Park – and with a large formal garden at the back, it was an impressive residence benefitting from an excellent location and magnificent views.