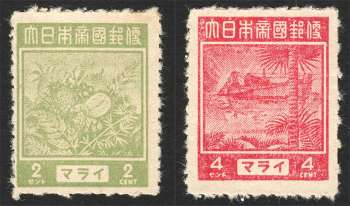 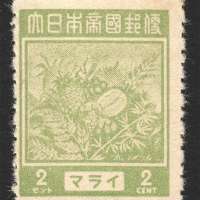 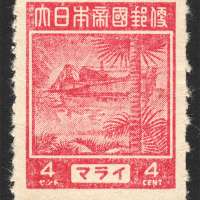 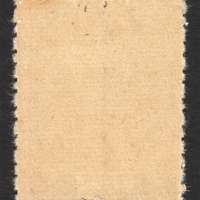 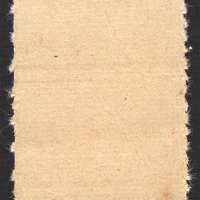 The 2c. pale emerald and 4c. carmine-rose are known with poor quality impressions, as if the plate was worn and the ink was thin. These are known imperforate or with rouletting instead of perforations, and are called the ‘Singapore printings’. Little is known about them for certain, except they were listed in the first stamp catalogues in 1946 - so they were printed during the occupation.

Very few of them are known used, and those few have dates in late August 1945 during that strange time between the surrender of Japan in August 1945 and the return of British forces to Malaya on 5 September 1945.

It is possible that towards the end of the war, with transport between the East Indies and Malaya getting difficult, that the printing plates for the 2c. and 4c. were moved from Batavia to Singapore. A single transfer of plates, thereby avoiding the need to send bales of printed stamps. In this scenario, only the 2c. and 4c. were printed, as in multiples they would cover most postal requirements. Perhaps they were printed at the Singapore printing works, but as no perforating machines were available there, they were rouletted or left imperforate. If this scenario is true, it must have taken place about July or August 1945.

Initially, the Japanese continued the use of British colonial postage stamps and captured stamps were over-printed by the new masters for use.

On 29 April 1943, the first Japanese designed postage stamps. It was designed specifically for use in Malaya & Singapore and were issued:
On 1 June 1943, the 2 cent (for printed papers) postage stamp was issued.