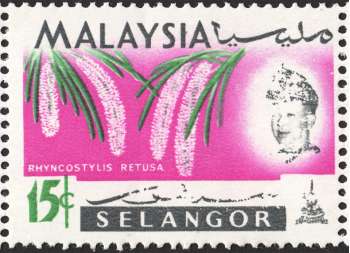 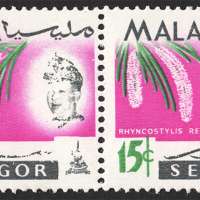 Modern Malaysia's first definitive stamps. The stamps featured orchids for the State low values and birds for the Malaysia high values. Each State had its own set, identical with the exception of the State name and Rulers portrait or State crest as applicable. The eight high values were printed in portrait format, featuring Malaysian birds, and had 'MALAYSIA' printed on them in place of State names.

Proofs were also produced for Singapore, but the stamps were never issued as Singapore withdrew from Malaysia, becoming an independent country.

The stamps were printed in landscape format by Harrison & Sons in England in two panes of 100, 10 x 10, with the cylinder numbers appearing on the right of the bottom margins, one for each colour, the left pane being numbered 1A and the right pane numbered 1B. There were two types of gum in use, Gum Arabic and PVA, the differences are clear to see, Gum Arabic being glossy and PVA matt. The colours were not produced by the standard four colour lithography method, cyan, yellow, magenta and black, but had dedicated colours as required by each value printed in photogravure. The left of the bottom margin contained colour check blocks, one for each colour surrounded by a black box, this black being for the State customisation black cylinder. The first issues were on paper watermarked 'Multiple SPM' upright and comb perforated 14 1/2. A few values appeared later on with watermark sideways and then later again without watermark.

The values issued were 1 cent, 2 cents, 5 cents,6 cents,10 cents, 15 cents and 20 cents. Various proofs exist showing the individual colours and combined up to full colour proofs. In addition, each value was produced on Harrison proof cards in full colour.

From the outset, there were problems with printing this issue as there are a number of missing colours present, in some cases more than one colour, indicating poor quality control. Some of the missing colours are now very difficult to find as in some cases only few stamps on a sheet were affected, generally 10 or less. Many of these varieties were the result of one of the printing colour supplies being interrupted during the print run and restarting, causing a missing colour on one or more columns.