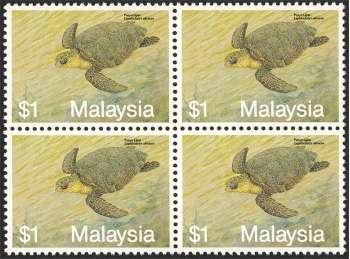 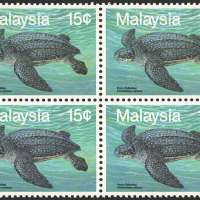 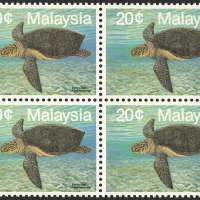 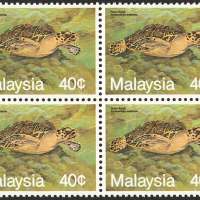 GENERAL INFORMATION
Country
Malaysia
Type
Stamp (Block)
Class
Special Issue
Issued Date
17/11/1990
Designer
Ong Soo Keat
Printer
Percetakan Keselamatan Nasional Sdn Bhd
Printing Method
Lithography
Gum
Gum
Watermark
SPM
Perforation Gauge
12
Perforation Type
Normal Perforations
IN COLLECTION CONDITION
Preliminary
Normal
Condition
Mint Never Hinged - Very Fine
Malaysia - Marine Life (Series III - Turtles) 1990 MNH Block of 4
Sea turtles have been on earth for over 100 million years. Turtles, like other reptiles such as crocodiles, lizards and snakes have scaly skin, breathe air, lay eggs, and have body temperaturs that fluctuate with the temperature of their environment. The hard bony shell, or "carapace", on the back of the turtle offers protection from enemies. It is composed of living tissue that includes the ribs and vertebrae along with bony elements that evolved from the scaly skin. The front and rear flippers oft he sea turtle have been specially adapted for swimming. Although sea turtles can swim under water for long periods of time, they will drown if they are unable to come up for air.

Over the past 30 years, there has been a general deline in the numbers od turtles in Malaysia. Female turtles must return to nest on the beach, but this most important part of their life cycle is now being threatened. Many of their nesting grounds are disturbed and have become unsuitable for nesting. The irresponsible actions of people are destroying the turtle populations of Malaysia. Unless these actions are checked, the turtles will soon become extinct. Oft he seven different kinds of sea turtles in the world, four visit the beaches of Malaysia to lay eggs.