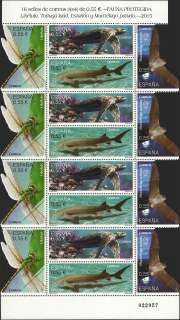 In danger of extinction due to the alteration of the environment, the destruction of their habitats and communities, and the indiscriminate use of pesticides, the protected species that are part of this philatelic issue are fighting to survive in a hostile environment. The four stamps are presented together and with the sides outlined by two of the species.

The dragonfly is brightly-coloured insect that belongs to the Odonata order. It has large, compound eyes, a long body, prickly legs for catching prey and two pairs of wings that move independently. When at rest, its wings remain spread and do not fold up. It is carnivorous and voracious, which is why it has strong jaws to destroy other stronger, larger insects. Egg laying gives rise to larvae that live in water and which can take five years to become adult dragonflies.

The leatherback sea turtle is the largest of all aquatic turtle species. It lives in both warm and cold waters and can measure over two metres and weigh between 250 and 700 kilos. Unlike other turtles, its shell is not hard. They travel hundreds of kilometres to search for food, mainly jellyfish. The males never leave the sea; however, the females lay their eggs on beaches, hidden in the sand. The theft of eggs, which are prized for their taste, and fishermen's nets are their main enemies.

The sturgeon has a long, thin body and skin covered in bony scales. The European sea sturgeon can be found in Spain. It lives in salt waters and in spring it goes upriver to lay its eggs. The young are born in the river and take two or three years to go to the sea. Their meat is highly prized and their eggs are used to make caviar. It is in risk of extinction due to changes in the environment.

The long-fingered bat lives in the area around the Mediterranean at a low altitude. It lives in caves, mines or tunnels near rivers, irrigation canals and wetlands. It is close to extinction due to the destruction of its shelter, the transformation of its habitat and the use of pesticides in farming, as it has increasingly fewer places to feed.