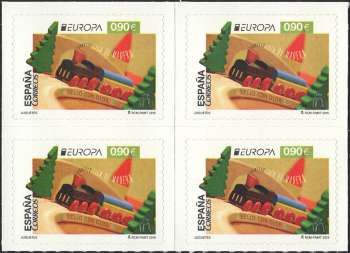 Cloth marionettes, teddy bears, rocking horses, seesaws, tin merry-go-rounds, train sets and a seemingly infinite number of toys have been depicted on the stamps pertaining to the Europe series, which this year is dedicated to “Old-Fashioned Toys”. Spain’s self-adhesive stamp is illustrated with the sketch of a wooden train that has a slight Scots pine scent.

For another year running, and since 1993, the postal administrations forming part of PostEurop have issued the Europe series with a common theme. The purpose of this series is to promote and foster the historical and cultural values of the European peoples through stamps. The first series, which began to circulate as stated above in 1993, was dedicated to “Contemporary Art” and the member states of the international organisation disseminated images of their most reputed artists. Since then, different themes have been used focusing on a wide range of topics, including: great discoveries, peace and freedom, nature reserves, water, the circus, gastronomy and musical instruments, among others. The wide variety of themes have led to the recognition of this series as one of the most collected and popular throughout the world.

The structure of PostEurop includes a working group dedicated to philately that meets periodically to debate common interests and to decide on the themes that will be featured on the stamps each year. Within the framework of the theme agreed, each country is free to design their own stamps, highlighting their unique traits, culture and customs. A standard established by the organisation was that all stamps must display the Europa logo that depicts a post box.

For the first time in 2002, PostEurop held an online public contest to select the best stamp in the series. Since then, the contest has become very popular and every year thousands of citizens from all over the globe participate. The theme of the first contest in 2002 was “The Circus” and the prize went to the Maltese postal service. The contest held in 2014 was dedicated to “Musical Instruments” and the winning country was Serbia. The Spanish stamp featured a Spanish guitar and the image of one of its great masters, Paco de Lucía.

PostEurop is the association of European public postal operators, one of the constituent unions of the Universal Postal Union. PostEurop was created in 1993 to simplify the exchange of mails in Europe, a task previously undertaken by theEuropean Conference of Postal and Telecommunications Administrations (CEPT, from its French acronym). A smaller but similar organization is the Small European Postal Administration Cooperation.

PostEurop's headquarters are in Brussels, Belgium.

Since 1993 PostEurop has co-ordinated the annual issue of Europa postage stamps, previously a CEPT function.