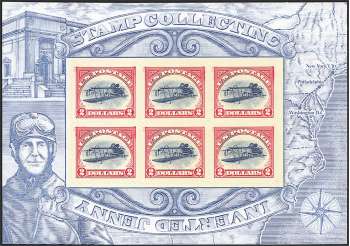 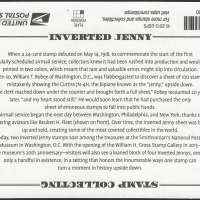 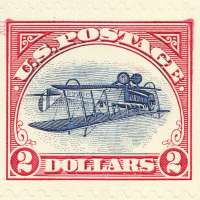 WASHINGTON — In a move to celebrate the grand opening of the William H. Gross Gallery at the Smithsonian National Postal Museum and promote October as National Stamp Collecting Month, the Postal Service dedicated a new $2 version of the most publicized stamp error in U.S. history today — the 24-cent 1918 Curtiss Jenny Inverted airmail stamp.

Two eerie occurrences took place surrounding the nation’s first airmail flight. The pilot got lost, flew in the wrong direction and crashed. And due to a printing error of the stamp created to commemorate this historic event, the biplane depicted on the 24-cent Curtiss Jenny airmail stamp was upside down. A sheet of 100 stamps bearing this error was sold to the public. One stamp sold at auction in 2007 for $977,500.

“The stamp is much more than a misprint,” said Postmaster General Patrick Donahoe in dedicating the stamp. “It also symbolizes the Postal Service’s pioneering role in American history. Air mail turned out to be one of our most successful innovations. By showing that air travel could be safe and useful, we helped create the entire American aviation industry, which went on to reshape the world.”

Pan Am, TWA, American, United, Northwest and other airlines originated as air mail contractors before passenger service began. Additionally to help commercial aviation get off the ground and to speed the mail, the Post Office Department helped develop navigational aids such as beacons and air-to-ground radio. Today the Postal Service continues as the commercial aviation industry’s largest freight customer. Mail also flies on FedEx and UPS cargo aircraft.

In 1918, in a rush to celebrate the first airmail flight, the Post Office department issued the 24-cent Curtiss Jenny stamp. Because the design required two colors, sheets were placed on the printing press twice — first to apply red ink and a second time to apply blue ink. This process was given to human error — as stamp collectors at the time well knew.

A Washington, DC, Post Office clerk — who had never seen an airplane — sold a sheet of 100 stamps mistakenly showing the biplane upside down. For nearly a century, stamp collectors have chased the Inverted Jennys and have accounted for nearly all 100 of them.

Nearly a century ago, the purchase of a single pane of U.S. stamps turned the collecting world upside down. The “Jenny Invert” became the world’s most famous stamp, and the 100 examples were eagerly sought after by prominent collectors. Billionaire investor Bill Gross was one of them.
In 2005, Gross paid $2.97 million to buy the unique Jenny Invert Plate-Number Block. He then exchanged the block of four stamps for the 1868 1¢ Z Grill owned by Don Sundman, president of Mystic Stamp Company, in a one-for-one trade that made international headlines.
Another block of four Jenny Inverts is on permanent display at the National Postal Museum in Washington, D.C., courtesy of Mr. Gross. The display was unveiled at the opening of the museum’s new gallery, which was funded largely by his generosity. Named in his honor, the William H. Gross Stamp Gallery is the world’s largest philatelic showcase. The 12,000-square-foot facility houses some of the greatest stamp rarities and is a mecca for collectors around the world.
To commemorate the gallery’s opening in 2013, the U.S. Postal Service issued a souvenir sheet of six $2 Jenny Inverts. This sheet was printed using plates created from the original 1918 dies. Now collectors can see the legendary Jenny Inverts on display and add a reprint of the famous “Upside-Down Airplane” stamps to their own collection.
COMMENTS
NEW COMMENT