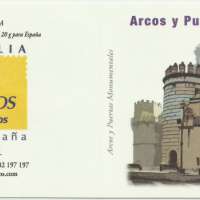 Arco O Puerta de la Macarena, Sevilla
The Macarena Arch or Gate, located in the neighbourhood of that name, and close to the Esperanza Macarena Basilica, is one of the entrances to the walled city of Seville. It has a unique arch topped with ceramic decoration of mainly classical design which was added after the original arch was built.


Peurta de Alcalá, Madrid
The Alcalá Gate was commissioned by Carlos III from the Italian architect Sabatini. The construction is grandiose, in the neo-classical style, with five arches, the three semicircular central ones and the two lintel arches at the ends. This Madrid landmark is to be found in Independence Square.

Arco de Santa María, Burgos
The Santa María Gate in Burgos is one of the city’s eight city gates and was built in honour of Carlos V. The monumental central panel is in the Renaissance style: framed by two powerful cylindrical pillars and over a semicircular arch, it is reminiscent of an altarpiece, with statues of figures relevant to the city’s medieval history in each of the niches.

Puerta de Serranos, Valencia
The Serranos Gate or Tower, one of the twelve gates along Valencia’s city walls, has a Gothic inspiration and was built by the Master Pere Balaguer, who began the gates in 1392 and completed them in 1398.

Arco de Triunfo, Barcelona
Barcelona’s Triumphal Arch was designed as the 1888 Universal Exhibition’s principal entrance. The architect Vilaseca i Casanovas had it built in the Neomudejar manner.

Puerta de Palmas, Badajoz
The Palmas Gate in Badajoz is flanked by two crenelated towers with circular bases. It dates from the 16th century and was used as a royal prison in the 19th century.

Puerta de Bisagra, Toledo
Toledo’s Bisagra Gate dates from the Muslim occupation and was rebuilt during the reigns of Carlos V and Felipe II by Alonso de Covarrubias in the 16th century, making it Renaissance. It is made up of two parts separated by a main square.

Arco de Bará, Tarragona
The Bará Arch is a Roman triumphal arch located on the site of the Via Augusta. It consists of a semicircular arch and was built in the time of Augustus.